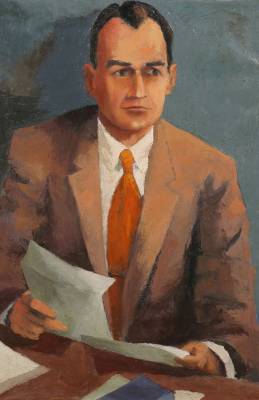 The portrait gallery of Allegheny presidents currently on display in the Tippie Alumni Center presents an imposing array of presidential dignitaries. Most are formally posed wearing dark vested suits or academic regalia. The exception is Dr. Louis Tomlinson Benezet. He is shown at his desk in the midst of preparing a speech, gazing alertly as if trying to envision the future. He wears a light brown jacket and an orange tie. The presentation is bold and straightforward.

One of the youngest college presidents in the nation, Benezet faced the task of moving the College ahead. Allegheny had first been a tiny fron­tier institution, then one of many “neigh­bor­hood colleges.” At the end of the nineteenth centu­ry it held re­gion­al prominence and, under William Crawford, na­tion­al recog­nition. But upward mobility in Allegheny’s standing slowed as a result of the growth of state institutions, two unexpectedly short presidencies, two in­terim admin­istrations, the Depression, and a war. During the pres­iden­cies of William Tolley and John Richie Schultz the cataclysmic effects of depression and war were countered, yet lit­tle energy remained to pro­vide for­ward momentum.

Born in LaCrosse, Wisconsin, June 29, 1915, Benezet received his Bachelor of Arts in 1936 from Dartmouth College, where he was elected to Phi Beta Kappa. Next came a Master’s degree from Reed College in 1939 and a PhD in Psycholo­gy from Co­lumbia University in 1942. He taught English at the Hill School in Pottstown, Pennsylvania, from 1936 to 1938 and served as instructor in psychology at Reed College between 1938 and 1940. From 1941 to 1942 Benezet was a fellow in psy­chology at the City Col­lege of New York. He then gained appointment as associate professor of psychology and assis­tant direc­tor of admissions at Knox College of Galesburg, Illinois. Follow­ing active duty in the Naval Reserve, in 1946 Benezet became as­sistant dean at the University College of Syracuse Univer­sity; in 1947 he was ap­pointed assistant to the chan­cel­lor. The Syracuse experience and connec­tion with Chancellor Tolley influenced Benezet’s se­lection as Alle­gheny’s fifteenth president in 1948. He took over re­sponsibili­ties on September 1 from Acting President Chester Darling.

Like Schultz, Benezet was known for his cordiality and charming informality.­ Much of the change he endeavored to bring about was achieved through personal contact. His ability to link faces and names was legendary. It took him only a few weeks to learn and remember the names of an entire entering class, plus those of new faculty, spouses, and their children. He could put any group at ease instantaneously. In his first weeks on campus he attended a cider and doughnut gathering of new faculty hosted by a young faculty couple. The newcomers gathered, but awkwardly avoided helping themselves. Conversation was at a standstill. So Louis—as he soon came to be known by all—strolled to the table, impaled doughnuts on each of his fingers and served the guests. With the ice broken the party became a relaxed affair. Benezet’s warmth had much to do with the quality of collegiality long attributed to his era.

Funds were limited, facilities crowded or worn. There was a strong need to construct new buildings, both to accommo­date students and classes and to show that Allegheny, like its competi­tors, was alive and moving forward. Benezet’s vision of a grow­ing College aroused alumni and towns­people. Improvement of athletic fields at Eberhardt Field along Park Avenue Extension had already begun. Erection of Baldwin Hall, Quigley Hall, and the David Mead Field House attached to the back of the gymna­sium signified Allegheny’s post-World War II renaissance. General education courses became the foundation of the curriculum. The role of student government expanded, faculty became more involved in policy making, and Benezet organized his chief staff into an informal cabinet that met Friday mornings to improve communication. Yet progress was endan­gered by the outbreak of the Korean War and a decline in male enroll­ments. Strenuous effort to obtain a Reserve Officer Training Corps program brought establishment of an Air Force unit in September 1951, helping to maintain both enrollment and finances.

In fund raising and in the competition for students, Benezet found Allegheny’s location a challenge. It was neither east nor midwest enough to associate well with similar institutions in those areas that were gaining national attention. Believing he had done what he could for the College, in 1955 he ac­cepted appointment as president of Colo­rado Col­lege in Colorado Springs. His fondness for Allegheny and friendships made in Meadville remained strong for the rest of his life.

Benezet again moved in 1963 to lead the Claremont Uni­versity Center and Graduate School in California. In 1970 he became presi­dent of the State University of New York campus at Albany. In 1975 he began appointment as research professor of human development at the State University of New York at Stony Brook for another ten years. From 1987 to 1990 he consulted on college adminis­tra­tion.

Author of several books and recipient of numerous honorary degrees, Benezet was president of the Pennsyl­va­nia Association of Colleges and Universities in 1951–52. He also chaired Rhodes Scholar selection commit­tees in Colorado, California, and New York. In California he served on the Governor’s Committee on Tax Reform and in New York on the Governor’s Task Force on Financing Higher Education.­­ In his last years he endured a lengthy battle with cancer, dying on January 23, 2002.