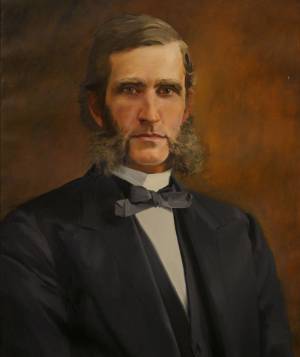 Born in Gowanda, New York, on November 25, 1830, Lucius Bugbee was li­censed to preach in 1850. Like George Loomis, he attended Genesee Wesleyan Seminary but trans­ferred his senior year to graduate from Amherst Col­lege of Massachusetts in 1854. Following a year’s teaching at Cooperstown Female College, he headed a banking house in Iowa. In 1857 he became principal of Fayette Seminary, which the next year was char­tered as Upper Iowa University. Health concerns forced his resigna­tion in 1860. Preaching posts in Wheaton, Chicago, and then Aurora, Illinois, fol­lowed. In 1865 he became president of North­western Female College in Evanston. Three years later he became pres­ident of Cincinnati Wes­leyan Col­lege. In 1869 Ohio Wesleyan of Delaware, Ohio, awarded him an honorary doctorate.

Bugbee’s success in building the Cincinnati college won him acclaim. In early 1875 the Allegheny Board of Control invited him to assume the presiden­cy of the College. He was inaugurated in June, taking over from Professor Jonathan Hamnett who had served as acting president for a year.

Bugbee began an energetic building program, refitting Bentley and Ruter halls and improv­ing the grounds. Culver Hall was placed under a cooperative system of board­ing, reducing costs by 40 percent. A capital fund was launched. The liter­ary soci­eties that had played and would continue to play such an influential role in Allegheny education throughout the nineteenth century—Allegheny, Philo-Franklin, and the new women’s Ossoli—were encouraged and their rooms refitted. Because of Bentley Hall renovations, he bought a home at 544 Park Avenue, becoming the first president never to reside in Bentley Hall (during his last years in office President Loomis dwelled on North Main Street).

Allegheny had accepted preparatory stu­dents since the time of Timothy Alden. Often the campus held more preps than matric­u­lated undergraduates. Bugbee formalized this practice by creating the Alle­gheny Preparatory School with a three-year program. Through care­ful letter writing Bugbee recruited a government-funded military professorship for Alleghe­ny, and a Military Depart­ment was formed in April 1877. To ensure the College’s ability to prepare Methodist preachers, the School of Hebrew and Biblical Literature was strengthened. A new School of Latin and Modern Languages was formed, giving the European languages higher status and relieving some students of the laborious study of classical Greek.

Enrollment prospered. In the 1876–77 academic year, the increase was 70 percent. Including the 135 preparatory students, attendance totaled over two hundred. Two new faculty members were added, raising the academic staff, including the president, to nine. In 1880, twenty-one students graduated.

Concern for housing of women caused purchase of a small frame house on Highland Avenue and then recruitment of a challenge grant from Marcus Hulings. Completion of a residence for eighty women­ in fall 1880 assured that coeduca­tion at Alle­gheny, always referred to before as an “experiment,” would now become per­manent.

The president was liked personally, applauded for his achieve­ments, and recognized for his executive and organizational abilities. Yet some faculty and students questioned his policies, including his emphasis on inculcation of religion. More ominous was the grow­ing con­flict between the trustees and the Methodist Board of Control. Issues in­cluded salaries, lengths of contracts, academic programs, and the utility of the Board of Con­trol. These dis­agreements would in time bring greater prob­lems. Stress, failing personal health, and shortfalls in his own salary payments led Bugbee to resign in 1882. He died in Evans­ton, Illinois, on July 28, 1883. His legacy to the College, however, would continue for generations to come, not only through his work, but also through numerous relatives and descendants who would attend and serve on the faculty and staff. Among these was his grandson, the noted entomologist Robert E. Bugbee, who taught biology from 1947 to 1974.