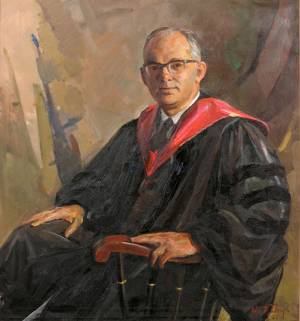 Allegheny obtained a down east New Englander in Lawrence Lee Pelletier, replete with a broad accent, reserved demeanor but internal warmth and love of conversation, and insistence on personal respect as the core of democracy and College governance. His presidential term from July 1955 through June 1980 was second in length only to William Crawford’s in the College’s first two centuries. It brought great change and increased national recognition.

Born on September 8, 1914, in Farmington, New Hampshire, Pelletier grew up in Sanford, Maine. Shy, he developed rapid reading skills and love of the written word. He attended Bowdoin College in Brunswick, Maine, on a scholarship. There he persevered despite loneliness that overwhelmed him during his freshman year. He never forgot what it was to be a small town boy thrown into foreign circumstances. Throughout his career he fought for student aid and an effective faculty advising program. He graduated in 1936 with Phi Beta Kappa honors, receiving MA and PhD degrees from Harvard University in 1939 and 1947. From 1939 to l945 he taught history and government at the University of Maine in Orono.

In 1946 he returned to Bowdoin to teach government. During the 1940s he served as consultant to the National Resources Planning Board and the Maine Municipal Association and published studies on financing state and local government, the initiative and referendum in Maine, and the town manager plan. In 1950 he was executive secretary to Maine Governor Frederick G. Payne and member of a tax committee that modernized the state’s tax structure. From 1953 to 1954 he was associate director of the Citizenship Clearing House of the New York University Law Center. The contacts he made in that post, including Judge Arthur D. Vanderbilt who headed the project, brought Pelletier to the attention of Allegheny’s search committee.

As president Pelletier led the College out of narrow financial straits in the 1950s, through the politically troubled 1960s, and through the financially challenging 1970s. Students, faculty and alumni came to appreciate his concern for them and his style of allowing faculty and administrators enough latitude to develop their potential. His practice of not commenting on issues in faculty meetings until after a vote was taken, or of simply not expressing his views, meant that faculty were often in the dark over how differently or critically he viewed a given matter. Each year he met with entering students in small group matriculation ceremonies, and he and his wife, Louise Pelletier, invited each graduating senior to a small dinner at their home.

During Pelletier’s tenure the student body increased from 1,000 to over 1,850. A three-term calendar was adopted in 1962 and a new curriculum granting more emphasis to the undergraduate major was established two years later. An innovative five-year internship Masters in Education program won national recognition. The faculty expanded from seventy-eight to 130 with over 70 percent holding doctorates. Salaries were increased and the system of faculty sabbaticals expanded. The students introduced an honor system and Pelletier founded a program of Alden Scholars and emphasized Honors Day. A chief goal of the president was to raise the educational standards and the scholarly productivity of the College. Student admissions to graduate colleges mounted steadily. Higher enrollment permitted the offering of a wider range of instruction by added faculty members. More students also required more facilities. Dr. Pelletier presided over the construction of South (Schultz), Carr, Murray, Highland, Crawford, and Ravine-Narvik halls, a new maintenance building, Walker Annex, Edwards House, Mellon Recreational Building, and the Fine-Arts Campus Center. In 1976 a new library was dedicated by the trustees in his honor.

The president met student unrest in the 1960s and early 1970s with patience and an open door. Dormitory visitation regulations were modified but not abandoned. Protests regarding government actions in Vietnam were heeded but the campus was not shut down. Programs for the educationally underprivileged were established. Efforts to improve access and service to minorities, however, had only limited success.

Dr. Pelletier served as trustee for the Middle States Association of Colleges and Secondary Schools. In 1968 he was elected by the Meadville area as its delegate to the convention that revised the Commonwealth of Pennsylvania’s constitution. He chaired its committee on style and drafting. He was honored with three Doctor of Laws degrees awarded by his alma mater in 1962, by Colby College of Waterville, Maine, in 1963, and by Gannon University in 1975.

For Pelletier, knowledge was the fountain of power. He read voraciously. His interest in gadgets is what led Allegheny to acquire its first 1640 IBM computer in 1962 when other small colleges were assuming that such items were only for universities. Language intrigued him. Not foreign languages, for they baffled him, but rather the precision of the rightly chosen word. The elegance of the honorary degree citations that he drafted gained renown in academic circles. For him the greatest art was knowing how to understand people. Few persons were his peer at sizing up other individuals. His skill at interviewing was legendary. Future oriented, his greatest concern was not what a person was, but what he might become. As long as he saw possibility of growth, he was supportive, and he possessed a sixth sense as to when to encourage or caution. If individuals were treated properly he believed the institution of which they were a part would prosper as well. Sometimes considered diffident and aloof by those who first met him, in time he revealed himself as warm and gregarious. An artful raconteur, his eyes would sparkle as he suddenly came to the climax of a tale. A man of considerable public patience, he privately felt deep frustration at the difficulties in moving individuals and the institution. But he steadily sought to be part of the solution rather than part of the problem.

Always subject to low points, Pelletier experienced spells of depression increasingly during his last years in office. Troubled by a sense that he no longer had the sort of support he had come to expect from faculty members and weakened by his own health problems and those of his wife, he opted not to match William Crawford’s term in office despite urging by trustees. Because he believed the purpose of life was service, he was wary of retirement. But after moving to York Harbor, Maine, in 1980, he found multiple ways to serve as a member of bank, hospital and other boards and as a fundraiser for local institutions. He succumbed to cancer on August 10,1995.

*This account is taken, with permission and slight changes, from  J. E. Helmreich, Through All the Years: A History of Allegheny  College. Meadville, PA: Allegheny College, 2005.