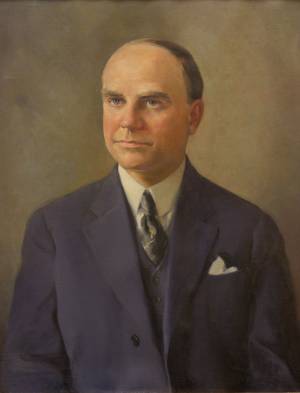 It is ironic that in his first address to the Allegheny community the Reverend James Albert Beebe referred to the high professional mortality rate of college presidents. Illness and stress forced his retirement after only four years as Allegheny’s president. Though the eleventh person to hold that title, in later decades he would be counted the twelfth president due to President David Wheeler’s two separate terms in the post.

Born in Mound Valley, Kansas, on December 8, 1878, Beebe received his early educa­tion in Harlan, Iowa. In 1897 he entered Simp­son College in Indianola, Iowa, but left during the Spanish-American War to serve as a first sergeant with the 51st Iowa Infantry in occupation of the Philippine Islands. He was thus the first Allegheny College president per­son­ally to have experienced active military service. After his discharge, Beebe returned to Simpson, receiving his Bachelor of Arts degree and Phi Beta Kappa key in 1903. The same year he was or­dained into the Methodist Epis­copal min­istry. He held his first pas­tor­ate in Des Moines until 1906, when he moved to attend the Boston University School of The­ology. While studying for his Bachelor of Sacred Theology de­gree, received in 1909, he held min­isterial posts in Newport, New Hampshire, and then in Man­chester, from 1908 to 1909.

For six years, beginning in 1909, Reverend Beebe ministered to a large con­gregation at the Engle­wood Church in Chicago. His reputa­tion as a person, scholar, and speaker led to his appointment in 1915 as pres­ident of the Iliff School of Theol­ogy in Denver, Colorado. Five years later he was called by the Bos­ton School of Theology to become its dean. While there, he received an honorary Doctor of Laws degree from Allegheny College and published a well-received book on The Pastoral Office.

Beebe was chosen president of Allegheny in February 1926 and took over duties from Acting President C. F. Ross on April 6. His integrity and trans­parent sincerity won friends. Former president William Crawford later referred to Beebe as “the man everybody loves.” Students liked to hear him speak more than famous visiting lecturers. Faculty appre­ciated his belief that governance was a cooperative matter involv­ing the teachers as well as the administration. By nature more a mediator than a leader, he saw his role as “a kind of liaison officer whose privilege it is to keep all groups in our college community in touch with each other and to interpret the spirit and ideals of each to the others.”1

Beebe’s dream was of a finer Allegheny, characterized by educational sincerity, devotion to the liberal rather than the vocational ideal in education, and dedicated to the notion that the highest end of education is the making of better women and men. He wanted better classrooms and the ­opportunity to house all first year men together. These goals were met by the construction of Arter and Caflisch halls. His plans to expand the li­brary building did come to pass, but those for an addition to the chapel were curtailed by the 1929 stock market crash.

Like Alden, Beebe thought religion was “the great instrument for securing morality.” To assure this, Beebe believed reliance should be placed on all teachers, not just those of the Bible, developing Christian attitudes in students by leading them to interpret life from the point of view of Jesus of Nazareth.2 The College, he argued, should provide a moral Christian perspective not through regulations, sectarian control, or courses in religion, but by personal exam­ples of faculty and staff.

Beebe did much to awaken alumni spirit. In particular he empha­sized all-College events that acknowledged Alleghe­ny history and tradi­tions. His motive in part was to offer focal points for College loyalty that would provide common ground as compared with increas­ingly strong fraternity ties and rivalries. He also sought alternatives to the growing fervor for intercollegiate­ sports, calls for increased athletic subsidies, and pres­sure to win big games, but was tardy and modest in exercising leadership in this area. The athletic and fraternity themes intertwined in an unusual manner in fall 1928, when the societies adjusted their living arrange­ments to ac­commodate others so that the football team might reside together in the Phi Gamma Delta house for the season. The president happily later noted that the academic averages of both the team and the fra­ternities rose as a result of this experiment, which he suggested dem­onstrated the distractive effect of fraternity activities on their members.

A lengthy nervous disorder forced Beebe to resign at the close of the 1929–30 academic year. His frame house at 544/545 Park Avenue, home to most presidents since the Reverend Bugbee—save for the Reverend Crawford who briefly resided on Highland Avenue—became a dormitory named for him. It is now part of the site of Schultz Hall. Beebe died in Newtonville, Massachusetts, on May 7, 1934.

*This account is taken, with permission, from  J. E. Helmreich, Through All the Years: A History of Allegheny  College. Meadville, PA: Allegheny College, 2005.