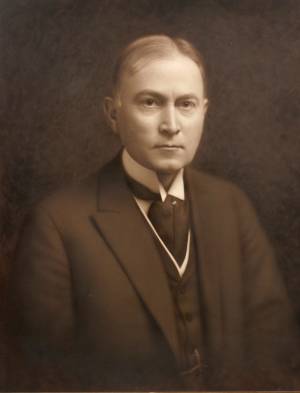 Hixson was born on November 24, 1874, in Dover Hills, Indiana, the son of a Method­ist minister. Early on he developed a love of nature and the skill of keen observation. A precocious student, at thirteen he passed the examination for a teach­ing cer­tificate, although he was too young to receive one. He entered a prepara­tory school associated with DePauw Universi­ty and four years later in 1894 en­rolled in the universi­ty. Between his sopho­more and junior years he took leave to teach school in Monrovia, Illinois. He also gained a preacher’s license and upon return to col­lege served the Brick Church near Greencastle, Indiana. At DePauw he was a member of the mili­tary training corps for four years, graduating in 1899 as a captain and a mem­ber of Phi Beta Kap­pa.

Hixson married that fall and in due course was ordained. He took successive pastorates at Bloomingdale, Rockville, South Bend, Terre Haute, and Crawfordsville, Indiana. In this last post at the Centenary Church, held from 1910 to 1914, his administrative and sermoniz­ing abilities reached full power. He developed a plan for an Every Member Canvass, a fund-raising technique that spread to other churches. In 1913 he received an honorary doctorate from DePauw and the following year became president of the University of Chattanoo­ga. In 1918 Dickinson College granted him an honorary Doctor of Laws degree.

Hixson’s presidency of Chattanooga was a work of art. When he arrived the university had but one building, with another on the way. Hixson added four more in his six years there, improved ties between the city and the uni­versity, and raised scholastic standards. Though successful, he came to believe that he had reduced factional disputes and tapped re­sources to the extent he personally could do so.

Hixson had long aspired to being part of a Methodist institution. When selected as Allegheny’s president in 1920 he had not taken a vacation in ten years, yet he quickly threw himself into his duties. In his inau­gural address of November 11, 1920, Hixson emphasized the need for Christian liberal education. He also called for a larger endowment. The capital funds cam­paign he promptly launched was oversubscribed in one year. To improve alum­ni ties to the College, he arranged for copies of the Campus and the literary magazine to be sent to all alumni free of charge. Alumni were encouraged to return for commence­ment by a switch to a weekend ceremony in 1924. A ten-year program, essentially his vision, called for enlargement of the campus, freshman dormitories, an auditori­um, and a re­modeling of Bentley Hall.

President Hixson was known for his reserve. Never vociferous, he spoke only when he had something to say. Modest, polite, and gentle by nature, he prevailed by kindness. Always direct and devoid of egotism, he was a steadfast Republican. Hixson served as secretary of the University Senate of the Methodist Episcopal Church and was elected to the thirty-third degree in Masonry. Students welcomed his liberality on cer­tain social issues as bringing Allegheny more closely in tune with the times. He suspended the ban on dancing on campus, allowing the 1921 junior prom to be held in the gymnasium. It featured a six-person band, “The Pennsylvanians,” led by a state university undergraduate, Fred Waring, and his younger brother.

After serving as a delegate to the Methodist General Conference in 1924, Hixson craved a break, but a Colorado vacation did not restore his energies. Following a tonsillectomy, he took to his bed, overcome by pain presumed to be caused by arthritis or some systemic poisoning or infection. Hixson last attended chapel on October 7, 1924. On 23 November, he died in his Park Avenue home, from whence he had watched repair on Bentley Hall. His body lay in state in Ford Chapel. Following the funeral at Stone Church, he was interred in the College plot in Greendale Ceme­tery.