For the Fall semester of 2014, I had the opportunity to study abroad at Lancaster University in England. Before the semester had started, I’d built up a lot of anxiety about travelling 3,500 miles by myself and then living in a different country for the next four months. But once I settled in, I was able to relax, and really start soaking in and learning about this culture that was new to me. One of the most important things I learned was that getting lost is not necessarily the worst thing that could happen. I was able to travel to nine different countries, all of them rich in culture and history that I mostly had only read about in books prior to visiting them. Sometimes, instead of planning a full agenda, my friends and I would simply walk around a city for the day and find lots of cool facets of history 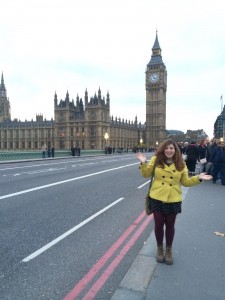 and culture that we would not have known about otherwise. For example, we once stumbled upon one of George Orwell’s former homes in London! Another time, we wound up at the site of the Bastille in Paris, which my history-loving self could not help from feeling star-struck over (disclaimer: we did look at maps and educate ourselves about the cities we were in to make sure we did not wind up in bad neighborhoods!). I brought this experience back to Lancaster, my home of four months, and back to Allegheny and my hometown as well, where my love of exploring has allowed me to not only find new things about the places I live, but be more open to new experiences and further delve into academic research, as well develop the career goal of becoming a cultural journalist.