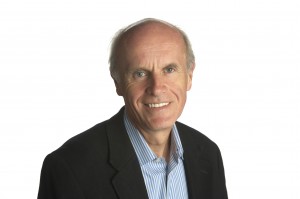 John Hillkirk knew for a long time that he wanted to pursue a career in writing.

He came to Allegheny College to major in English and minor in Communications. Part of him knew he wanted to pursue journalism as well, so he took as many of those courses as were offered.

At Allegheny, Hillkirk was involved in many extracurricular activities. He was a member of Phi Delta Theta fraternity and served as the house manager and pledge master. He worked in the Dean’s office and was also an active staff member on The Campus, the student newspaper.

Journalism has been a part of Hillkirk’s life since 1974, when he started working for The Campus. He also worked at the Erie Times-News and began interning there in college. He enjoyed the internships and stuck with them. He interned at the Tribune twice, once for photography and once as a reporter as well as the Valley News Dispatch.

When asked what helped determine his career path, he said there wasn’t just one thing but that he was influenced by the Watergate scandal.

“The conventional resignation of the president of the United States had a huge impact on me. I think there were a lot of stories that had important and revelatory impact on the public. All of those stories had an effect on me and other journalists of that time period.”

A field that is centered on educating and entertaining people with information and news given in a timely manner, Journalism is important. Hillkirk also mentioned that it’s important to keep an eye on the government and other authorities. He’s committed to investigative journalism that holds people accountable and sheds light on things.

Hillkirk believes the most important thing for student journalists is to be active. Take classes, get internships and gain experience. Also, be active in social media, keep an eye on issues, share them with friends and followers on campus. The Campus newspaper is another vital medium that allows for journalists to find their voice, Hillkirk said.

Further, he think it’s vital that students are aware of what’s happening in fast-breaking news and two newer forms, social media and blogging. The more conventional approach, such as writing and reporting, are important, too. Understanding all of these will help to give student journalists confidence in their field.

One of the issues that young journalists now face is the thought that  journalism is a dying field. Staff at USA Today and other major papers have experienced significant layoffs in recent years. Hillkirk said he doesn’t believe that journalism is dying. It’s simply changing.

“Millions upon millions of issues are on smartphones and tablets. People are watching news- related videos, following news organizations or reporters or bloggers. It’s still out there; it’s just changing and you have to go with the change or be ahead of it. It’s a lively and different world.”

He also mentioned that it’s difficult to compete on the business side, but more people are reading now than when print was the only option, which is encouraging.

Hillkirk and his wife have two children. His son, Jack, started college at Elon University, where there are about 5,000 students. Grace, his daughter, is in 10th grade at a school near D.C. Hillkirk’s wife volunteers as a Spanish interpreter at a health clinic.

Hillkirk is not the only Gator in his family. His brother, Keith Hillkirk, was at Allegheny in 1968 and played basketball. His nephew Scott Hillkirk also attended Allegheny but did not graduate from here. His cousin, Bridget Sheehan, is the women’s volleyball coach at Allegheny College.