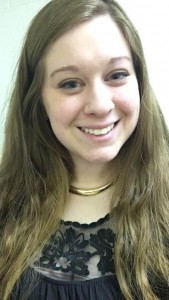 When Amanda Spadaro entered her senior year at Allegheny College, she planned to graduate and become a doctor. She said she loved biology and had been incredibly excited about her senior comp. All it took was one journalism class her senior year to change her mind.

Journalism started as a hobby. Now, it’s her career.

Amanda realized that a job in journalism would be exciting and entertaining. From her perspective, people in journalism never stop learning and they develop a weird knowledge of how the world works.

“I’m 22 and still don’t know how to cook; but, if I ever needed to contact somebody in the local government, I could do it with ease,” Amanda said.

While at Allegheny, Amanda majored in biology. She was president of Students Promoting Eating Disorder Awareness and Knowledge. She was the business manager of the student newspaper, The Campus, all four years, serving also as the science editor one year, co-editor in chief her senior year. She was a member Alpha Phi Omega. She volunteered at the Meadville Medical Center and was a research assistant working with professor Kristen Webb in biology. She worked as a teacher’s assistant for freshmen biology seminars and a writing consultant in the Learning Commons.

Amanda is currently the education reporter for the Butler Eagle and she covers news and features in the community as well. Before working at the Eagle, Amanda was a reporter for The Meadville Tribune, where she wrote a piece on World War II veterans and learned a valuable lesson. Going into her interviews, Amanda had a strong opinion that eventually shifted after hearing the soldiers’ side of the story. After her conversations with the veterans, she learned that there’s more than one version of events and it’s a reporter’s job to be open to all sides of a story.

Amanda has three topics she said she loves to write about. She likes science stories because of her biology background. She’s interested in crime reporting and social issues such as racism, poverty and power structure. When writing about education, her beat, she said she wants to pursue what a person is taught in school versus what she needs in the world.

Allegheny alumnus John Hilkirk was the investigative team editor and former editor-in-chief at USA Today. Amanda met him and his words made a lasting impression.

“Any info you are looking for, even if it’s controversial, it’s written somewhere,” Hillkirk said.

And that piece of wisdom always stuck with Amanda. It changed how much time she puts into a story. She realized if she keeps digging and asking questions, she will find the information or the person she needs to tell the story.

There are hard questions that need to be asked and somebody has to do it. She also believes that in life there should always be something you are curious about. She likes to discover why topics are important and why people should care about them.

When she’s reporting, she recognizes she has competing responsibilities: “Duty to the public and duty as a human being.”