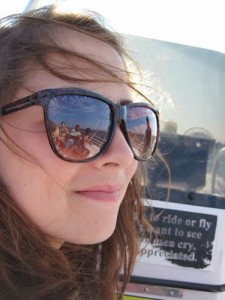 Caitie McMekin discovered she had a passion for photography while studying at Allegheny College. She graduated with a Bachelor of Science degree in neuroscience and communication arts, but she realized she wanted steer off her science path after she took a multimedia journalism class. McMekin stayed true to herself and became a freelance photojournalist.

When she attended Allegheny, there weren’t many photojournalists around, but the school offered numerous opportunities that helped propel her on her career. She was the photo editor for the school newspaper, The Campus. She was a member of the film union, and a video assistant. She participated in the Allegheny Regional Film Festival. And she attended a journalism conference and multimedia workshop created by journalism professor Cheryl Hatch, which had a tremendous impact on her, McMekin said.

During her sophomore year, she had her first hands-on experience while shooting at a Mac Miller concert. She was thrilled because she was able to arrive early at the concert and see the mic checks happening and how everything was set up. Her favorite part, besides the concert itself, was the next day when the story with all of her photos was posted. Everybody had been excited about it, she said.

After she graduated, she became a freelance photojournalist and shadowed at New Jersey Advance Media and then worked for The Chautauquan Daily, where she was the multimedia editor intern. She is currently working as a photojournalist intern for the Knoxville News Sentinel. She recently finished a project on a drag queen.

“It’s exciting to see something I did make people feel a certain way,” she said. She has also covered protests at the University of Tennessee.

Because of her career, she has the ability to talk to anybody she wants to. Her job gives her the means to talk to people and she has become a lot more observant and out-going.

Being a freelance photographer has also challenged McMekin.

“People expect you to know what to do,” she said.

She’s been figuring everything out as she goes and doesn’t hesitate to ask for help when she needs it.

“I’m always trying to make what I do better and I’m never complacent,” McMekin said. “You have the story in your hands and the power of how you’re going to tell it and I want to tell it correctly. You really begin to understand the way people work, a little bit at a time.”

McMekin said the way to make it as a photojournalist is by really pushing yourself.

“You have to want it and if you want it, then go for it.”