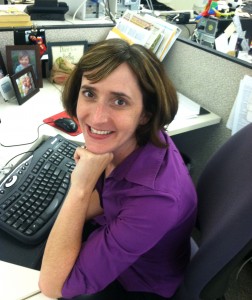 Erica Erwin knew her passion for writing would be a beneficial asset to her Allegheny experience.

Originally intent on becoming a Biology major, she switched to Communication Arts after realizing she could turn her passion into a career.

At Allegheny, Erica worked on the Allegheny Magazine in the Public Relations office and served as the editor-in-chief for The Campus.

Once while distributing newspapers across campus, she forgot to set the emergency brake on her car, which sent it rolling into a brick pillar. Luckily, the car sustained only minor injuries and Erica jokes about the experience today.

Before graduating in 2002, she interned for WICU-12, the NBC affiliate in Erie, Pa., and the Meadville Tribune. The summer before her senior year she interned at the Erie Times-News covering topics from human-interest features to breaking news.

Though she had enough credits to graduate early, she stayed at Allegheny doing a self-designed independent study and working at the Times-News as a full-time staff reporter, where she has remained for 11 years.

Currently, Erica covers the education beat for all school districts, colleges, and universities in the Erie region. Her previous work includes coverage of Erie City Hall and municipal government, among other beats.

A liberal arts education from Allegheny and writing for The Campus provided her with a foundation for her journalism career.

“Having a journalism minor, I think, is a great complement to an overall well-rounded liberal arts education. It allows a student to learn necessary skills specific to the field while at the same time gaining a broad base of knowledge.”

Along with a diverse education, Erica believes it is important to remain up-to-date on technology and utilize your multimedia skills.

“No longer is it only about writing for the next day’s edition. It’s about telling stories in new and compelling ways on a variety of platforms. Journalism is an exciting and vitally important job that gives you access to people and places you wouldn’t have otherwise. Jump in.”