Allegheny Professor and Photojournalist Takes her Skills to Liberia

Cheryl Hatch, Allegheny visiting assistant professor of journalism in the public interest, won’t be in class for the first week of the spring semester.

CORRECTION: She won’t physically be in class – but she plans to be there via Skype.

That’s because Hatch has taken her photojournalism skills to cover stories in Liberia, thanks, in part, to funding she and writer Brian Castner received from the Pulitzer Center on Crisis Reporting.

According to its website, the Pulitzer Center “is an innovative award-winning nonprofit journalism organization dedicated to supporting the independent international journalism that U.S. media organizations are increasingly less able to undertake.”

While in Liberia, Hatch and Castner, who arrived on Dec. 29, 2014, are covering the U.S. military efforts to assist the Liberian government in combating the Ebola outbreak. Their first story, “‘Let This Ebola End’: Liberians Prepare for 2015 with Parties and Prayer,” served as Jan. 5’s headline for the international news organization VICE News.

“I believe a journalism professor needs to continue practicing journalism, and this is a timely story in Africa, where I’ve done much of my work in the past two decades,” said Hatch, explaining why she decided to spend her winter break more than 3,500 miles from Meadville. “I teach by example. I want the students to see me do the work I love outside the classroom and bring it back to the classroom. Journalism is real life in real time.

“Receiving support from the Pulitzer Center is a terrific honor and a big help, since this is an expensive story to cover,” she adds.

Hatch plans to Skype with her JOURN100 news writing and JOURN300 multimedia classes on Jan. 13.

UPDATE (1/13/15): Since this article was published on Jan. 12, Hatch successfully Skyped from Liberia with her news writing and multimedia classes on Jan. 13. Hatch conducted the course as though she were physically in the room, beginning by having the students come closer to the camera to introduce themselves so she could put a face with a name. “Even though I’m not physically there, I felt it was important as your professor to be there on your first day of classes,” she said.

Student Christina Smith from the news writing class said this was her first course with Hatch. Afterward, she said, “I’m really excited to hear about her experiences. She seems so knowledgeable; what a great person to learn from.” 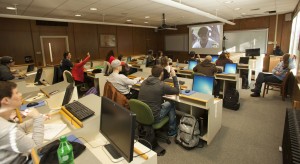 Cheryl Hatch interacts with her class via Skype on Jan. 13. Photo by Bill Owen ’74.

During last semester’s news writing class, Hatch says the students interviewed NPR photojournalist and video editor David Gilkey via Skype as part of their final exam. Gilkey recently had returned from covering the Ebola outbreak in Liberia and Sierra Leone.

Hatch met Castner, author of The Long Walk: A Story of War and the Life That Follows, when he spoke at Allegheny during the Combat Paper Project in September.

Hatch plans to return to the United States on Jan. 16. To follow her journey in Liberia, visit http://pulitzercenter.org/project/africa-liberia-ebola-war-veterans-US.