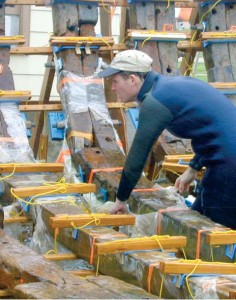 When a ship has lain on the ocean floor for centuries, it has much in common with a brittle eighty-year-old whose bones could snap under everyday stress. So when the seventeenth-century frigate La Belle was recovered off the Texas coast fifteen years ago, it created an enormous challenge for nautical archeologist Peter Fix ’87. He’s spent more than twelve years working to preserve her remains.

The French ship, which went down in a winter storm in 1686, was presumed lost until GPS technology combined with information from seventeenth-century French and Spanish documents finally located the wreck. And it wasn’t just any wreck. La Belle was part of a four-ship fleet headed by René LaSalle, the explorer who had claimed the Louisiana Territory for France.

Two challenges confronted Fix, the assistant director for maritime archeology and conservation at Texas A&M University. He had to find a way to dry out and preserve the ship’s nearly four hundred wooden components, including the long curved beams that formed her ribs. And he had to come up with an unobtrusive support system that would allow a museum to display the ship while reducing stress on her fragile structure.

Air-drying the waterlogged remains would have warped, twisted, and cracked them, so the conservation team planned to soak her parts in a bath of polyethylene glycol, a form of wax derived from petroleum. “But when oil reached $140 a barrel, we saw a 300 percent increase in cost,” says Fix. And, he added, “Money’s tight.” The plan was modified to use roughly one-tenth as much polyethylene glycol, supplemented by a process that would freeze-dry the remains using the same technology used to freeze-dry coffee. The work will be done in a chamber forty feet long and eight feet in diameter. “Our goal is to remove the water using the gentlest method possible,” Fix says. In the meantime, the remains are kept submerged in a pool of purified water with a low percentage of polyethylene glycol. 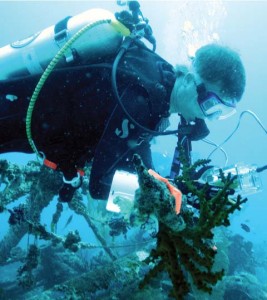 Once the wood has been dried and stabilized, it can be reassembled, though reassembly presents a problem as well. When built, the ship’s components supported one another and held the frigate together. But even with preservation, the rescued pieces will be much too brittle to do that. So Fix developed a system of fiberglass bolts with a support system of carbon fiber and fiberglass that can hold La Belle together but won’t block the view of observers.

Fix grew up near Mystic, Connecticut, home of Mystic Seaport, the nation’s premiere maritime museum, where he worked before and during his years at Allegheny. After graduating with his degree in history, he settled on a career in nautical archeology and chose the highly rated program at Texas A&M. He is now finishing his Ph.D. while working for the university’s world-class conservation program.

Since the planet’s oceans are littered with sunken vessel, Fix’s playing field is global, and his work takes him both far from his Texas base and well below the ocean surface.

“We go where the wrecks are,” Fix says. “If that happens to be in Indonesia, or the Aegean, that’s where you’ll find us.”