Judge Michael Ryan just loves it when an offender stands before him in his courtroom and tells him, “You don’t know how hard it is out there.” According to Ryan, the court workers just take a deep breath, sit back, and smirk. They know what’s coming. 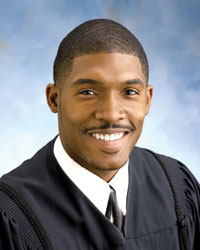 “I try to indicate, without being condescending, that but for God’s grace and but for my desire to work hard, I would be in the same position they are in,” explains Ryan, the youngest person ever appointed as a Cleveland Municipal Court magistrate judge.

“I get a lot of young men who don’t have an education, whose family lives are similar to my childhood and who keep making excuses,” he says. “That is just an open invitation for me to tell them about my life. Despite the fact that I went through hard times, I didn’t choose the path that they are on.”

Ryan’s is quite a story. Born when his mother was just fifteen years old, Ryan endured an unimaginable childhood. Both his mother and stepfather were addicted to drugs, and his stepfather physically and mentally abused his mother, who died when Ryan was just 13. He found peace in school.

“I was just really comfortable there,” Ryan recalls. “At school, I wasn’t worried about my safety. I wasn’t concerned about whether or not I was going to eat at night or whether my father was going to beat up my mom, or about my parents using drugs. I wanted to learn and I could control what happened at school. School became a tool for me to do well to try and overcome my other circumstances.”

Ryan excelled in the classroom. He earned a scholarship to Allegheny, majored in English, and decided to pursue a career in law while taking a civil liberties class with Professor Robert Seddig.

“He changed my philosophy and thoughts about the law,” says Ryan, who also ran track at Allegheny and was a member of the Advancement of Black Culture student organization, formerly known as the Association of Black Collegians. “I had a negative perception of the law because, when I had been in the courtroom, it was because a family member was being sentenced. I didn’t want any connection to the legal system. But Professor Seddig was so passionate about law that he changed my perspective.”

After Allegheny, Ryan graduated from Cleveland-Marshall College of Law and worked for several private law firms and for Cleveland’s law director before becoming a magistrate judge. In recognition of his professional achievements, Ryan received a Gold Citation from Allegheny College in 2006.

Indeed, Ryan’s story is incredible. Want to hear it from him? Just stand before him and tell him he doesn’t know how tough life can be.