The Power of Computing-and Mentoring

Lori Pollock ’81 had no idea she would be a minority in her field when she took her first computer science class as a sophomore. Among the first three Allegheny graduates with a B.S. in computer science, she went on to earn her Ph.D. from the University of Pittsburgh. Now she’s working to bring other women into a field in which the percentage of women starting in the major is only 5 to 9 percent nationwide.

A professor in the Department of Computer and Information Sciences at the University of Delaware, Pollock says that although she never felt that unusual as a woman in computer science in the early 1980s, a lot has changed. “While all the other sciences are making gains and increasing the number of women in their disciplines, the number of women in computer science is continuing to decrease,” she says. “Today I can walk into a classroom of undergraduates and there may not be any women in a class of thirty students.”

Pollock first started looking into why this phenomenon was happening—and then into ways to reverse it. “Some people believe that teachers, guidance counselors, and parents don’t understand what computer science is and how much of an impact it’s having on society,” she says. “It’s easy to understand what a doctor does and how that work impacts other people. But people don’t understand the role of computer science in society.” But Pollock notes that computer science is behind many of the advances in other fields: in the health industry, social networking, art, and education, to name just a few. 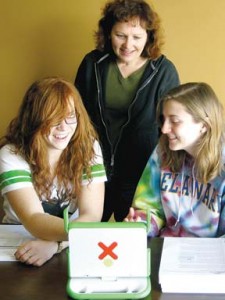 A nearby charter school in an economically disadvantaged area had received a donation of 1,400 XO laptops specially designed for kids. “I called them up after we learned how to program the XOs and said, ‘Here’s what we’re doing—is there anything we can do to collaborate with you?’ ” she recalls. As a result, last fall four teams of University of Delaware students partnered with seventh- and eighth-grade teachers to create learning games for middle-school students to use on the new laptops. “We also want to explore how to incorporate computational thinking in the classroom,” Pollock says, “and help the young students learn to think algorithmically and with abstraction.”

Pollock is also involved as an advocate with CRA-W, the Computing Research Association Committee on the Status of Women in Computing Research. “Our goal is to increase the number of women in computing and to help the women who are in the field to succeed in their careers,” notes Pollock, who creates and organizes national mentoring workshops for graduate students, faculty, and industry researchers.

“I’m hoping that the mentoring is helping women in the field go further in their careers than they thought they could. Because we’re such a minority in this field, it can be intimidating for women,” Pollock says. “But I hope the mentoring will give them the confidence to go forward and pursue their goals.”