The Reverend Elder Nancy Wilson is a firm believer in destiny. Elected in July 2005 as moderator of the Metropolitan Community Churches (MCC)—the highest position in the MCC denomination, which offers a spiritual community for lesbian, gay, bisexual, and transgendered (LGBT) Christians—Wilson says she has always related to the words of Jewish theologian Martin Buber, who said, “You must believe in Destiny. It stands in need of you.” 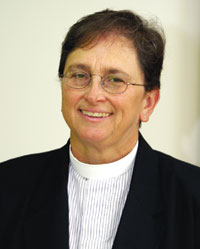 Wilson, who grew up in the 1960s in the Methodist Church, acknowledges that a mere ten or fifteen years before, her life as a woman in the ministry, and most certainly as an openly gay minister, would not have been possible. But in 1972, when she graduated from Allegheny, seminaries began to admit women in what Wilson calls “a significant way.”

And when she received a Rockefeller Scholarship to attend the School of Theology at Boston University, Wilson also began to reveal her sexuality and found herself at the forefront of the gay rights movement in Boston. “I went to seminary in 1972 knowing that I was a lesbian,” she says, “but I didn’t know how I was ever going to be clergy, because I knew the Methodist Church was not going to ordain me.”

Then Wilson heard Larry Bernier on the radio. He was looking for a woman to help him start a branch of MCC in Boston, and she accepted the challenge almost immediately. “It was a sense of adventure—this Christian church that would reach out to gays and lesbians,” she says. “I was still learning, but I had a strong sense of myself. I didn’t have a fear of what God thought of this.”

After relocating to Detroit and graduating from a Roman Catholic seminary, Wilson moved to MCC Los Angeles and stayed with the church for nearly fifteen years. She became pastor there in 1986, at the height of the HIV/AIDS epidemic, and fought for the rights of those afflicted with the virus. “I became quite good at doing funerals,” says Wilson, who lost hundreds of MCC staff , clergy, and close friends to the disease.

Before her appointment as moderator, Wilson was pastor of the Church of the Trinity MCC in Sarasota, Florida, where she lives with her partner of thirty years, Paula Schoenwether. Now, Wilson is the denomination’s official spokesperson, moderates business meetings at general conferences, and offers support to MCC leadership.

Wilson says that, today, MCC is pioneering social change, protecting not just the rights of sexual minorities but the rights of all people, and creating a local church for LGBT people who “feel like they have no spiritual place or community.” Just a generation before, she admits, none of this would have been possible.

“We’ve had the privilege of standing by really strong people and having an impact on people’s lives,” Wilson says. “That gives great joy. It feels like destiny with a capital D.”