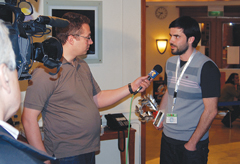 Eleftherios “lefty” Fylaktos ’95 has all the makings of an award-winning documentary filmmaker. An ardent observer of the human condition, he is fascinated by people and their stories, eager to reveal and interpret their realities through his lens. In March 2008, the international film community took notice: Fylaktos’s latest documentary, the Archelon Bubble, won the Audience Award for a film under forty-five minutes at the prestigious thessaloniki international Film Festival. The volunteers of ARCHELON, the nonprofit sea turtle protec- tion society of Greece, were the perfect subject for Fylaktos, a native of Thessaloniki, who says he is drawn to people who just “do the right thing.” Every year, more than 500 volunteers from around the world travel to Greece at their own expense to assist ARCHELON in its mission to conserve loggerhead sea turtles and their habitats, rescuing marine life in danger of extinction. ARCHELON’s volunteers live in rudimentary camps for weeks, working on turtle nesting beaches and at the organization’s rescue center to help with rehabilitation and restoration projects. “What is most interesting is that they form a surreal world,” Fylaktos says of the volunteers. “You could call it a country—a country of positive energy and good intentions.” He immersed himself in that country for twenty days to produce a documentary entirely on his own: no film crew, no production studio—just Fylaktos and his camera. “i did what they did,” he says. “I was part of the rotation and followed their schedule. i went there as a documentarist and left as a volunteer.” Fylaktos also left with twenty hours of film footage and the arduous task of editing it down to thirty minutes. But his hard work paid off. By submitting his documentary to thessaloniki’s annual film festival—considered one of the premier festivals of Southeastern Europe for new and emerging filmmakers—Fylaktos earned recognition not only for his talents as a filmmaker but also for the organization and cause that first inspired him. He is now showing his documentary at festivals and universities, and Prisma+, a digital television channel in Greece, plans to broadcast it this year. today, Fylaktos lives in Athens and works in the sports depart- ment of the Hellenic Broadcasting Corporation, ERT S.A. He has worked as a professional director for eleven years, both as a freelancer and for public television, and has produced several notable documentaries, including two for the Food and Agriculture organization of the UN (FAO) at the urging of his good friend Nedzad Ajanovic ’95, an FAO field program officer. A communication arts major at Allegheny, where he chose to study abroad, Fylaktos traces his first encounter with moviemaking back to the College. “I was really blown away when i started using the camera and editing equipment. editing especially made an impact on me because I could manipulate the images I shot,” he says. “i just knew this was what i wanted to do. i thank Allegheny for teaching me to have an open mind and to listen to people and their stories.”