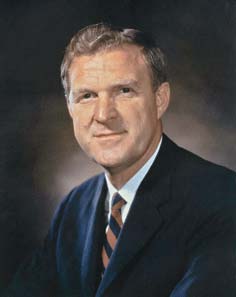 Raymond P. Shafer His funeral service was held at Ford Chapel on December 17, with the eulogy given by the Honorable Hugh Flaherty, former secretary of legislation and public affairs in the Shafer administration. “He was loving, decent, kind, brave, forgiving and highly intelligent,” Flaherty said. “At the core of his character stood respect, integrity, fairness, honor, and courage…The result was a good man, husband, father, friend, student, war hero, and a strong, rare leader of this community, this state, and this nation.”

In many ways and for many people, Governor Shafer epitomized the ideals of public service. As governor, he was unflagging in his commitment to his fellow citizens. His administration has been credited with significant achievements in education, transportation, environmental conservation, fair housing, and long-term budget planning. As he said in an interview in 1992, “Believe me, the only excuse for government is to give service to the people.”

His career at Allegheny College, from which he graduated Phi Beta Kappa, presaged his later accomplishments. He majored in history and political science and was a Rhodes Scholar candidate. He served as his class president for each of his four years at Allegheny and was the student body president as a senior. He also was a member of the Pennsylvania Beta chapter of Phi Kappa Psi fraternity and one of the founders of the chapter’s endowment fund.

On the playing field, he won nine varsity letters, four each in basketball and soccer and one in track and field. He was the basketball team’s leading scorer for three seasons and was an all-America halfback in soccer, at a time when division classification did not exist in collegiate athletics. A graduate of the Yale Law School, Governor Shafer began his career in public service as many men of his generation did: in uniform. He served in the U.S. Navy, both in naval intelligence and as the skipper of a P.T. boat in the South Pacific, from 1942 to 1945. More than eighty combat missions, and particularly the heroic rescue of seventeen paratroopers stranded under Japanese fire on Corregidor, earned him the Purple Heart, the Bronze Star, and the Commendation for Meritorious Service.

His career in public service continued with two terms as district attorney for Pennsylvania’s Crawford County (1948-56), a term as a Pennsylvania state senator (1959-63), and a term as lieutenant governor under William Scranton (1963-66). As lieutenant governor, he led a bi-partisan committee to promote reforms to the commonwealth’s outdated constitution. His own bid for governor was secured with an overwhelming majority of more than 250,000 votes.

Governor Shafer continued to serve the nation throughout his life. In 1971 he chaired a national commission on marijuana and drug abuse; from 1974 to 1977 he served as special counsel on the staff of Vice President Nelson Rockefeller; and from 1977 to 1988 he was a partner and senior counselor with the accounting firm Cooper and Lybrand, focusing in the area of community service.

An enthusiastic student of China and its culture, he was a member of the National Committee on U.S.-China Relations, serving as its chair in the mid-1980s. He was active on numerous boards, including the National Organization on Disability, the Cleveland Clinic Foundation, the National Legal Center for the Public Interest, and the Freedoms Foundation. Most recently he had served as counsel to the Washington law firm of Dunaway & Cross.

Governor Shafer’s service to his alma mater was remarkable as well. He had served as a trustee of Allegheny College for more than twenty years when he accepted a one-year appointment to the presidency of the College. At the time he was quoted as saying, “I have always said that my love for Allegheny was behind only my love for my country and my family.” He continued to serve as a trustee of the College until his death.

Among the many honors that Governor Shafer received was the prestigious Gold Medallion of the Society for the Family of Man, “in recognition of creative leadership and dedicated service.” Allegheny College is one of more than thirty colleges and universities to have awarded him an honorary degree.

President Dwight David Eisenhower once said of the governor, “In a few words, Ray Shafer has brains, integrity, and guts.” The nation was fortunate that Governor Shafer dedicated those qualities to the service of his fellow citizens.