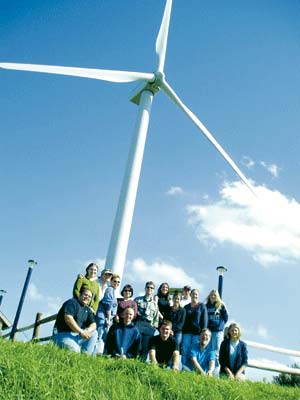 As the ecology movement came of age more than three decades ago, Allegheny was among the first institutions to recognize that study of the environment should become a major part of its curriculum. Today, it has become a national leader in the quality and scope of its programs , which emphasize that the environmental movement and business must come together to solve global warming and other environmental threats to the planet.

If you were to travel back in time to 1970, the year of the first Earth Day celebration, you would see that the battle lines in the environmental debate were crisply drawn. Environmentalists were on one side, industry on the other. 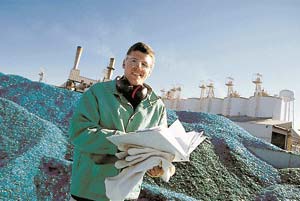 The same thinking applies to Allegheny’s campus, which is beginning to make widespread capital improvements to shift the College firmly into the future. Wind energy now accounts for 10 percent of the College’s power usage—and that figure will soon increase to 15 percent. Leaves and other organic matter are turned into mulch in a high-tech composter. The new North Village apartment-style residences use natural lighting, furniture made of wood from sustainable forests, and a geothermal heating and cooling system. The new carpeting is made of recycled materials and will be recycled in turn when it wears out. New parking lots are being built of porous materials to allow rain and snow to seep into the ground rather than run off into the storm sewer system. The use of chemical sprays to maintain the College’s lawns has been cut 90 percent, and housekeeping is using environmentally friendly cleaning supplies. 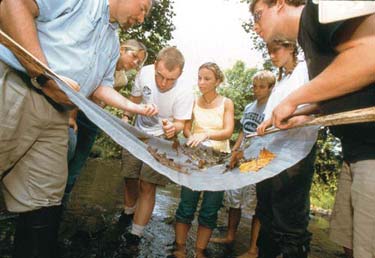 “It’s as different as night and day from when I arrived here sixteen years ago,” says Ken Hanna, the director of Allegheny’s physical plant. “Now we incorporate environmental principles into everything we do.”

These types of changes could not occur without alliances between business and the environmental movement. Without business, the College couldn’t purchase wind power, couldn’t buy wood products from sustainable forests, and couldn’t utilize porous pavement systems. Without business these products and services simply wouldn’t exist.

But the reverse is true as well. Without environmentally conscious customers such as Allegheny, there would be no market for the environmental products that business is rushing to produce. General Electric plans to make money producing green products. Wal-Mart has become a leading seller of organic food and a leader in energy conservation. BP, the British oil giant, is spending billions of dollars to develop solar power systems and other forms of alternative energy. And Ford Motor has become a pioneer in green manufacturing.

One reason business has seized on the opportunities of today’s “green” initiatives is that it makes sense. “Selling environmental products and services will be a major part of the economy,” says Professor of Economics Don Goldstein. “Increasingly, some of the major manufacturers are shifting their product and technology mix to take advantage of that.” 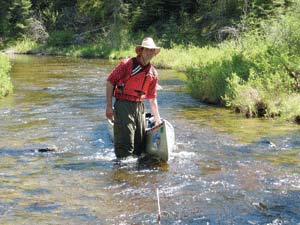 And when Goldstein heads to the classroom to train future business leaders, the environment is one component of what he teaches. “We’ve tried to incorporate environmental issues throughout our courses,” he says.

The reason for this emphasis is simple: there’s a lot at stake. Many of the worst potential problems weren’t even on the radar screen when the first Earth Day was celebrated. These include the loss of much of the ozone layer, which shields us from harmful solar radiation, and the threat of the planet’s overheating due to the greenhouse effect.

“On September 11, 2001, nearly three thousand people died in America at the hands of terrorists. During the same year, more than seventy thousand Americans died of complications from air pollution,” says Pallant. “Now the Stern Commission in England is talking about the implications of global climate change causing a number of deaths that will dwarf those in World War II, with a concomitant decline in economic productivity of 20 percent. We are altering the face of the planet more quickly and more dramatically than it has been altered at any time in the last million years.”

And that’s why business and environmentalists have come together to solve the problem. If global warming scenarios come to pass, humanity will suffer mightily and business will suffer along with the populace. Farmers and ranchers will face changes in rainfall and rising temperatures that could decimate production. Coastal real estate will become worthless as properties are flooded by rising ocean levels. Insurance companies will watch profits evaporate as they pay out billions of dollars to settle claims for damages from ever more powerful storms and rising seas. 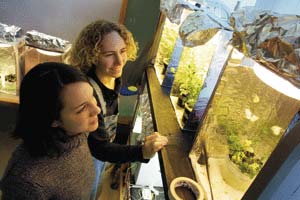 One way to mitigate long-term effects would be to use less fossil fuel, which is blamed for much of the rise in world temperatures. That means more solar power, more wind power, and power from sources not yet on the market. If these technologies work, they could also head off another problem: ruinous energy bills, which are hurting not only family budgets but the bottom line of energy-intensive corporations.

Fortunately, the transition to a post-fossil fuel future is under way, in efforts large and small. Near Meadville, Acutec Precision Machining is investigating wind power as a potential power source for its aerospace parts manufacturing operation. The company wants to know if it can cut its energy bill with wind power and have excess power available to sell back to the electric grid. The company’s president/owner, Allegheny trustee Rob Smith ’73, has turned to the College for help.

“Environmental science students will measure the wind,” says Goldstein. “Economics students will translate that into dollars and cents to determine if the investment is worthwhile.”

If our world can make the transition to a sustainable future based on clean energy, the economy benefits, the environment benefits, and everyone wins. “How well we make this transition will have a major impact on how clean our environment can be and how strong our economy is,” says Goldstein. “This will determine our quality of life.”