Ensuring that employees can collect the paychecks they earn is all in a day’s work for Vicki Lipnic at the U.S. Department of Labor.

“So many of the laws in my jurisdiction are things that we as the American workforce take for granted every day—such as a forty-hour workweek, the expectation that we will get paid, and that we actually are paid for our work,” says Lipnic, who was appointed assistant secretary of labor for employment standards in 2002. “Those really are remarkable achievements.” 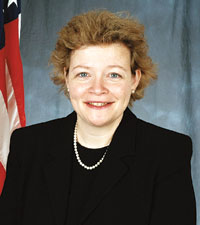 Lipnic—along with the four thousand employees in the division she leads—administers and enforces the laws and regulations governing areas such as minimum wage, overtime, child labor, family and medical leave, and workers’ compensation benefits.

Under Lipnic’s direction the Department of Labor updated thirty-five-year- old rules on overtime pay in 2004, an effort that involved painstaking work and compromise. “It had been tried a couple of times in other administrations,” she explains, “and for whatever reasons—probably because of the controversy that came with it—it wasn’t accomplished.” Lipnic also spearheaded the strengthening of regulations that require labor unions to disclose to members how their dues are spent. And in June she released what is considered to be the seminal report on the Family and Medical Leave Act of 1993.

“A lot of what my agency does is writing and enforcing regulations and making sure that those regulations are current and up to date, and it can take years of effort to do that,” says Lipnic, who earned a law degree from George Mason University. “I’ve argued cases in court, written briefs, and worked on Capitol Hill. And writing regulations—putting things in finite detail—is hands down the most difficult task as a public policy matter.”

More than five years of experience with the Secretary of Commerce, as well as six years as in-house counsel to the U.S. Postal Service on employment issues, prepared Lipnic for heading the Department of Labor’s largest agency. Just prior to her appointment as assistant secretary, she served as workforce policy counsel to a major committee in the U.S. House of Representatives.

A career in public service seemed destined for Lipnic. Her mother and father—who was a World War II veteran and longtime mayor of Carrolltown, Pennsylvania—instilled in her the importance of being an involved citizen. At Allegheny she majored in political science and history and interned in Washington, D.C. Lipnic also points to experiences in Kappa Kappa Gamma, student government, and the Campus as key to developing her leadership skills.

And Lipnic has found it both rewarding and challenging to lead a high-profile federal agency, advancing policy initiatives amidst constant scrutiny from the media and Congress. “I really like problem solving,” she says, “and for me trying to bring people together to solve problems that are about the public good is what’s most interesting and rewarding.”