by Dave McInally, Secretary of the College 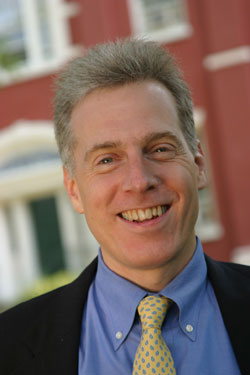 I confess that I sometimes have trouble finding the fairway on a mini-golf course, especially when people are impatiently waiting behind me. Can you imagine what it must be like to tee off in front of Arnie’s Army—Arnold Palmer’s large and loyal contingent of fans—for the emotional final round of his Masters Tournament career?

That’s what Nathan Smith ’00 did this April. But the pressure didn’t keep him from firing off two great rounds and narrowly missing the cut on the final hole. His former Allegheny golf teammates did their part this year as well, qualifying for the NCAA Division III national tournament for the twenty-eighth consecutive year, a record for all NCAA divisions. And in the spirit of success breeding success, next year we will add women’s golf to our varsity sports program.

We all love to see our Gators win. And win they have—this year’s North Coast Athletic Conference winning percentage was .719. The football, softball, women’s soccer, and men’s track teams (indoor and outdoor) captured conference championships, and many other teams and individuals placed near the top. Under the leadership of Athletic Director Larry Lee and the dedicated staff, the athletic department experienced unprecedented success in intercollegiate competition, fund-raising, and student recruitment. Winning feels good.

But at what price? Have we as a nation become so obsessed with finishing in first place that we have forgotten our values? It would seem so, based on the state of affairs in professional and big-time college sports. Olympic track and field and major league baseball are in the headlines for drug scandals. Teenagers are turning down college scholarships to enter the NBA draft, despite staggering odds against their success. Large university athletic departments are under fire for recruiting and sex scandals. And as a youth soccer and basketball coach, I have seen how these misplaced values, this distortion of purpose, infect sports even at the earliest stages, as parents and coaches pressure children to specialize in one sport at far too young an age.

Our last, best hope for restoring athletics to its rightful place—where it is a healthy part of the development of the whole person—rests right here, with Allegheny and the other members of NCAA Division III. We do not offer athletic scholarships; our students are amateurs who compete for the love of the sport. We emphasize intellectual development, and academic commitments always take precedence over athletic activities when conflicts emerge. We believe in equal athletic opportunities for women and men. We foster citizenship and sportsmanship and do our best to extend lessons of teamwork and leadership beyond the athletic arena to all of students’ endeavors.

At Allegheny, we have come to the conclusion that massive reform is needed at the national level if we are to achieve the Division III ideal. Too many Division III schools have athletic departments that mimic Division I programs (which themselves emulate professional sports)—and we know where that leads. Institutions are dedicating ever-increasing resources to sophisticated facilities and individualized coaching in order to recruit students, and this arms race escalates until schools either go broke or find themselves tainted by recruiting scandals, behavior problems, or embarrassing graduation rates for student athletes.

We won’t break this pattern with money or policy. We will break it only with hard work and good values. Our entire athletic program is based on the philosophy that excellence in one area of students’ lives creates habits of excellence for their whole beings, throughout their lives. A student who is a top performer on the playing field is expected to be a good student and citizen as well.

Allegheny’s academic and conduct requirements are stricter than those of the NCAA and NCAC. Will we lose an occasional game because a top player doesn’t make the minimum grades? Possibly. But we believe that we will win many more in the long run because our students know that their utmost effort is demanded in class, in the residence halls, and on the field, track, or court. And let’s remember that as much as we love to win every time we step on the field or dive into the pool, we have a more important game to win as educators—and that is developing character, values, intellect, and citizenship.

Need proof? How about a .719 winning percentage? How about Nathan Smith and the countless other Allegheny athletes who shine brightly on the national stage? We’ve got a wonderful athletic tradition here, with a great coaching staff and talented students. Most important, we’ve got solid educational values. We will honor our ideals, and the victories—of all kinds—will keep on coming.

This article was featured in the Summer 2004 Issue of Allegheny College Magazine.