“Small moments are sweet,” says Yasir Shah ’03, and with that simple statement he seems to sum up not only his novel Shrine but his four years as an Allegheny student as well.

Shah, a communication arts major from Pakistan, published his first novel last year. Shrine is the story of three friends 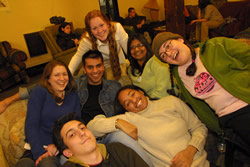 who gather each day at a shrine to share the small comforts of life and the incomparable joys of unconditional friendship. Although his three protagonists occupy the lowest ranks of Pakistani society-they are a prostitute, a eunuch, and a masseur who works the streets-Shah’s novel is about hope not despair. As Shrine explores street life in Shah’s native city of Karachi, the author takes his readers on a journey marked by twists and turns worthy of O. Henry.

Although Shah hoped he would see his novel published, even he was surprised at how quickly it was picked up by Pakistan’s Jang Publishers. After he had submitted a synopsis and three chapters to several publishers-and been rejected-Shah says he was content to put his hopes for publication on hold for a year or two.

Last spring, however, when he was making plans to fly home to Karachi for the summer, his father casually said, “You might also want to go to Lahore.” When Shah asked why, his father responded, “A publisher there is picking up your book.”

That summer kept Shah very busy, with the whole process of publication truncated into a few short months. By the time he was ready to return to Allegheny for the fall term, his book had been published. In fact, just two days before his flight back to Pittsburgh, Shah was at a launching ceremony for Shrine.

Since then Shah’s book has received critical acclaim in Pakistan, where Dawn, the country’s leading newspaper, has hailed it as “a wonderful, unforgettable book.” The Internet edition of Dawn includes Shrine in an article on the best Pakistani literature published in English in 2002.

“A World So Close, Yet So Alien”

Shah says that the idea for Shrine came to him when he was a junior in high school in Karachi and spent some time in the area that he writes about.

“I was inspired to write Shrine when I still lived in Karachi and I decided to accompany my father for an early morning walk on the shore,” Shah writes in the book’s preface. “I saw people that I would usually stay away from … The more the days passed the more I was intrigued by a world so close to my house yet so alien to me … I wanted to learn about these people.”

Shah began researching in books and magazines to get more background into the world that had so intrigued him. “I knew readers in Pakistan would expect accuracy in the scenes I described,” he notes. But several years passed before he actually started writing Shrine.

“An idea will come to me, but I won’t write the story for a year or two or more,” he explains. “I’m a very visual writer. I plot it all in my head before I start writing anything down.”

Shah says he wrote the book sequentially, from Chapter 1 to the end, and then kept rewriting it. Much of the work was done in the fall of 2001, while he was in Washington, D.C., on an internship with NBC News. Because Shah didn’t have a laptop, he did much of his writing in computer labs at American University. 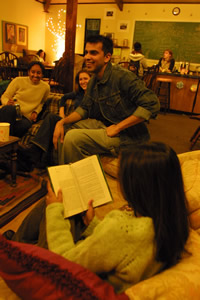 The “small moments” of life are not only what intrigue Shah as a writer, but the significance of these moments, he says, is what has made his life at Allegheny so full. “Four years seems like a long time,” he says, “but it isn’t. Even though Allegheny is a long way from my home, when I met the friends I have at Allegheny I knew I could never transfer. It doesn’t matter where you are, as long as you have people who make you laugh. What I noticed when I came here was that everyone smiled. I feel like I’m living in a small colony of friends.”

Although Shah says he believes that writing can’t be studied in the same way that other disciplines can, he is quick to credit his teachers and mentors at Allegheny with helping him develop as a writer. He especially credits Assistant Professor of English Judith Rose, Assistant Professor of Communication Arts/Theatre Ishita Sinha Roy, and the director of the College’s International Programs and Services, Danuta Majchrowicz. “They are always there to answer my ‘Where to from here?’ queries,” he says. “I owe them a lot.”

Shah says his sister read the book in its early stages and gave him a number of helpful suggestions. But Shah gives the lion’s share of credit to his parents for helping to make Shrine a reality. “They have always been so supportive of my work,” he says. “If it wasn’t for their encouragement, the book would still be a manuscript gathering dust on a shelf.” The dedication to Shrine reads, “Dedicated to my grandparents, for giving me the world’s best parents.”

“After I learned about the kind of life led by people such as the characters in my book,” Shah explains, “I wanted to thank my parents for shielding me from that kind of life.”

What’s ahead for this published novelist who’s still an undergraduate? His short story “The Cab Driver” has recently been published on the Web. And he says he’d like to work in the Jackson Heights section of New York City-or “Little India” as it is called-to research and write the stories of the people who live there. “I like to jump into a world before I write about it,” he explains.

There’s also talk of translating Shrine into Urdu, though Shah says he’s not in a hurry to have it done and wouldn’t want to do the translating himself. “I would like to revise the book further, though, and get it published in the States,” he says.

In the meantime, however, there’s a little writing project called the Senior Comp to be completed. When asked if he considered turning Shrine into a comp, he laughs. “I tell people that if Shrine were my comp or an assignment for an academic class, I never would have finished it.”

This article was featured in the Spring 2003 Issue of Allegheny College Magazine.