Building the Future That We Want 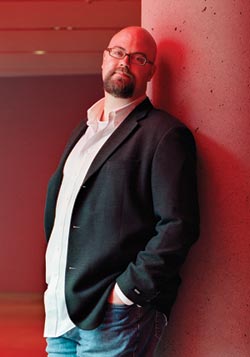 After graduating from Allegheny, Alex Steffen sought life experiences that would help shape his future. He found them in other countries.

Steffen spent six months in the “newly free” Eastern Europe–where he met and shared ideas with people from across the globe–before working as an environmental reporter for the Japan Times.

“This proved to be a series of influential experiences,” Steffen says. “I was really exposed to the environmental problems that were beginning to emerge. Those experiences convinced me that I wanted to find better ways to deal with our environment.”

A history major, Steffen counts his time at Allegheny as one of those key experiences. “Allegheny offers extraordinary opportunities to have real conversations with terrific professors,” he says. “Those conversations helped me build critical thinking tools that I use in all areas of my life.”

Armed with those tools and galvanized by his work abroad, Steffen started a movement in 2003 when he helped found the online magazine Worldchanging.com, which has allowed him to extend his ability to help people change the way they think about the environment. “real solutions already exist for building the future we want,” notes the site’s mission statement. “It’s just a matter of grabbing hold and getting moving.”

“There is a traditional environmental narrative that says humans are flawed, nature is perfect, we are bound to destroy nature and anything we do to prevent that destruction is going to make our lives worse,” explains Steffen, a resident of Seattle. “We point out that there are ways we can solve major environmental and social problems while making people’s lives better.”

With a staff of just four full-time employees, the site relies on a large network of volunteers, freelancers, and contractors. Still, Worldchanging rang up more than 2.5 million unique visitors last year, Steffen says.

Steffen edits the site and works with teams of writers and guest contributors to produce content. He also runs the business side of the organization, including fund-raising and administration. And, as Worldchanging has received greater exposure, Steffen is often sought as an interview subject or panel expert.

“I do more traveling than I would like to,” he says. “But the most rewarding thing about the work I do is that I get to interact with many brilliant people. I also get enormous satisfaction in knowing that what we do is making a positive impact.”