A Life Saved to Save Other Lives 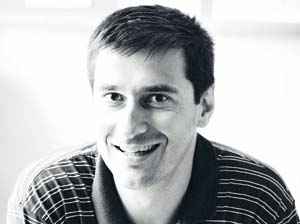 “One thing that is important for you to realize,” says Nedzad Ajanovic ’95, “is that Allegheny and the support they gave me saved my life.” Talk to Ajanovic for a few minutes, and you’ll find out why he says that.

Ajanovic came to Allegheny in 1991, just as tensions in his homeland of Bosnia—and in the rest of the former Yugoslav republics—were mounting toward what would become a long and terrible war. How did a young man from Eastern Europe come to northwest Pennsylvania to major in environmental studies? Through the help and encouragement of Gretchen Sigler Snyder ’64, who, along with her husband, was Ajanovic’s guardian when he finished school in New Delhi, India.

Ajanovic’s parents stayed in Sarajevo, where they endured a three and a half year siege: “constant shelling, constant killing, shortages of basic commodities of life,” as Ajanovic describes it. At the same time, Ajanovic was studying at Allegheny, where he found both the College and the Meadville communities to be very supportive. A key figure, he says, was Professor Rich Bowden, who gave Ajanovic the opportunity to do research at the Harvard University Experimental Forest.

After graduation, a friend he’d made during his time in India hosted Ajanovic in Calgary, where he secured a graduate position at the University of Calgary and earned a master’s degree in environmental design, which led him to an interest in sustainable development. 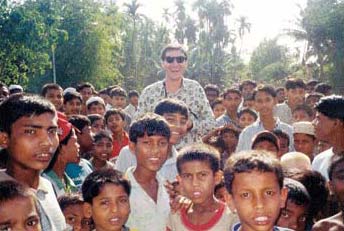 Ajanovic’s career has spanned several appointments in international development, both in a nongovernmental capacity and with the United Nations. With the Food and Agriculture Organization of the U.N., he coordinated relief efforts in war-ravaged Kosovo that included repairs of 2,500 tractors and the import of 4,500 heifers, some of them by air. With CARE International in Myanmar (formerly Burma), Ajanovic developed a first-of-its-kind marine turtle conservation project.

But there are two projects over the last ten years that stand out.

In Myanmar, Ajanovic worked near the Naf River, which forms the border between that country and Bangladesh. It was through his direct intervention and planning that several hundred families of the oppressed Rohingya ethnic group—stranded on the wrong side of an artificial border imposed by the breakup of the British Raj—gained the right to develop cash crops in northwestern Myanmar.

Ajanovic got the opportunity to help out closer to home when the FAO hired him to coordinate and manage the agency’s relief efforts in Kosovo. This job led to another at the U.N. and a unique opportunity to bring some investment to Bosnia.

Having learned to navigate bureaucratic channels, Ajanovic brought his master’s thesis to the attention of the right people. He’d spent time in Bosnia during his master’s work, developing a plan for construction and maintenance of a grayling hatchery in Bosanska Krupa to take advantage of what he calls the “great potential, yet devastated resources” of his native land. Ajanovic’s U.N. contacts, in turn, asked him to develop his thesis project into a proposal to the Norwegian government; after much planning and not a little luck, the project became a reality, bringing much-needed development funds to the recovering country.

“One of the things I was taught at Allegheny was to have a level of certain critical thinking, and not to hide behind nationality and say whatever we do is the right way,” he says. “That’s what I learned at Allegheny: being able to think from the other side, and then do something that you feel is correct.”