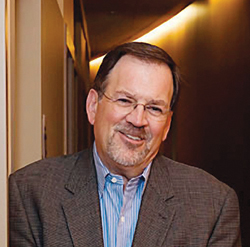 When Gary Elliott ’72 departed from his home in Los Altos Hills, California, for Allegheny last fall, he forgot one important thing. An overcoat. global brand manager for Hewlett packard, Elliott arrived on campus as a guest presenter for professor Ishita Sinha Roy’s Communication Arts 260 class, having prepared what Sinha Roy called “an amazing talk” on lessons in corporate marketing. But Elliott was ill prepared for the snow that arrived in Meadville in early november. “He was very brave about it, though,” says Sinha Roy, laughing.

Elliott did not, however, forget the curiosity he has always associated with Allegheny students. “Having a curious mind is a requisite for anyone in business today,” he says. “I think when you have exposure to the kinds of programs that Allegheny offers, it opens up your mind and inspires you to think of different solutions. that curiosity has never left me.” A Psychology major at Allegheny, Elliott remembers one particular psychology course that “really probed people and ideas … one where we were engaged in a number of exercises where we were creating business programs and new ways of communications.” The “field work” nature of the course inspired Elliott, who then continued that research for his senior thesis. For his comp, Elliott traveled to new York to visit advertising agencies. He worked to understand the various motivating factors and decisions behind commercial advertisements.

“I still have a spark and desire and energy to create pro- grams that inspire and motivate,” says Elliott, who has helped forge prominent partnerships for Hp with Disney, the Sydney opera House, tiMe inc., Starbucks, and Dreamworks, to name a few. Elliott’s work and vision for HP are much celebrated in the corporate media sector. He was instrumental in melding the HP and Compaq brands when the companies merged in 2002. He earned the prestigious Art Directors Club 2004 Vision Award, AdWeek magazine’s Campaign of the Year, and Creativity magazine’s international Advertiser of the Year. But the students in Sinha Roy’s class may remember Elliott for some of his other endeavors. “He shared examples of HP’s work doing community and social building,” says Sinha Roy. “After Hurricane Katrina, HP worked with restoring family photo albums that had been destRoyed—it was very moving.” She says it was a reminder to students that “working for a corporation goes beyond marketing and making a buck; it is about thinking of being a good citizen.” As head of Hp’s global Citizenship board, Elliott recognizes a direct connection between the responsibilities he has as an individual citizen of the world and the responsibilities that Hp has as a global business. “It is about really living out the values you have on a personal level,” he says, “and expressing that through a business.”