Standing in the shadow of the Kaiser Wilhelm Gedachtnis Kirche, I watched Allegheny students and professors as they listened to Beverly Lytle ’06 talk about the history of the church. Following the fall of Berlin, the jagged remains of the church tower were preserved as a reminder of war’s destructive power. I could sense the mixture of emotions as the students listened intently and wondered about their good fortune in being able to study with their professors in a different world. It’s been twenty-five years since I studied abroad in Salzburg, Austria as a college student. I knew then that it was an experience that would change my life. The time spent abroad with Allegheny students last May reminded me why. 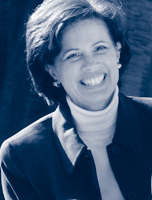 Imagine watching a group of young people become more culturally aware before your very eyes. Prior to enrolling in this Experiential Learning (EL) travel seminar called “Traveling in the Liberal Arts Tradition,” several students had never been abroad. Two had never been on a plane. This was truly an adventure.

Among us were extroverts who readily made new friends on city trains and buses; introverts with thoughtful reflections on history and current events; observers who noticed every detail, whether in architecture, music, or nature; and risk-takers who tried everything from speaking a new language to tasting new foods. Our students—fellow travelers—were curious, enthusiastic, intelligent, and fully engaged. They asked probing questions. They argued about politics and world events. They pulled playful pranks on one another. And, remembering that students are still students, some of them could be seen going out in search of local clubs well after the older among us had gone to bed.

I especially enjoyed seeing the interactions between students and Professors Glen Rodgers, Antoni Moskwa, and Peter Ensberg. It was obvious that the students held them in high regard. By traveling together, they now had the chance to spend time with their professors in a different setting. I think they also enjoyed seeing their College’s president in a different setting—beyond Bentley Hall, now wearing khakis and a sweater, speaking German and telling jokes. One student told me he had previously viewed the administration as being “over there”—not really part of his life. But his opinion had changed because, “Not only is Dr. Cook our president, he’s a regular guy, too.”

I recently corresponded with Caroline Lang ’06, who participated in the study tour and then spent a semester in Lancaster, England. Her words give a clear sense of how lives are transformed by studying abroad:

“I spent a great deal of time traveling in England and then I went to Istanbul and Budapest. I found myself thinking about the EL term quite a lot. Small things would remind me of the trip, like the sight of other wayward travelers, the smell of dirty laundry and just the feeling of being on the move. What I appreciate most about the experience of the EL term is that I practiced how to really learn while traveling—about myself, about my friends/travelmates and, of course, about the place where I was.”

Derek Golna ’07, a biochemistry major, told me, “Not a day goes by where I don’t think about that trip. I find myself pulling out my journal, reading the entire thing, recalling practically the whole trip in my mind. The things I saw, the experiences I had, the friends I made—these are things I will never forget.”

Richard and I have long been advocates of study abroad. Although the greatest transformations are achieved through total immersion in the language and culture for an extended period of time, studying in other cultures for even short periods often leads to future experiences abroad. Once you get a passport and use it for the first time, it will burn a hole in your pocket until you can use it again. Your appetite has been whetted and you want to continue to develop a deeper understanding of your own worldview and culture by living with others who don’t share the same background and experiences.

Beverly Lytle ’06 wrote to me from Budapest, Hungary, where her understanding of the world has expanded and deepened. “What left the greatest impression on me was the less than twelve hours I spent in Bosnia-Herzegovina. What one might call countryside was covered with rubble and decay. Towns were left in complete ruin, but it was entirely evident that this war had taken place in my lifetime. Seeing photographs of what happened is shocking, but still distances one from the event. While in Sarajevo, I could tell that all but the youngest of the Bosnians, Croats, and buildings around me had had some part in the war… I don’t believe these images will ever leave me. They have drastically altered my perspective on war, history, government and cultural differences.”

Studying abroad is a perfect opportunity—often joyful, sometimes sobering—for putting a liberal arts education to work. My hope is that increasing numbers of Allegheny students can and will study another language and immerse themselves in another culture. If they do, I will guarantee a life-changing experience.

Terry Lahti and her husband, President Richard Cook, traveled with students for six days in Germany during the EL study tour “Traveling in the Liberal Arts Tradition,” which Professor Glen Rodgers writes about in our feature story.

This article is from the Spring 2005 issue of Allegheny Magazine.