And Are Promise of Things to Come 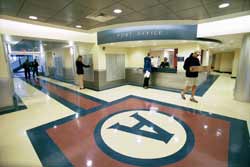 In the midst of a particularly harsh Meadville winter, the opening of the newly renovated Henderson Campus Center seemed like a godsend. With McKinley’s transformed and rejuvenated on the first floor, the post office, bookstore, and coffeehouse on the second, and meeting rooms and student organizations on the third, students might have thought that if it weren’t for classes, they would never have to muster their courage and face the cold again.

Larry Merriman ’50 not only chaired the trustee planning committee that oversaw the project’s evolution, but he and his wife, Patricia, also contributed to the renovations fund. “Allegheny’s on a roll,” he says. “You’re just starting to see the beginning of it.”

Though the renovations to the Campus Center were a monumental undertaking, no one is taking a breather now that they’re finished. The board of trustees and College officials are already looking ahead to projects that will further enhance Henderson’s status as the heart of the campus: the transformation of nearby Cochran Hall into an alumni center and the construction of a new theatre and communication arts building on the Campus Center’s north side.

The architectural firm of Celli-Flynn Brennan was given the charge of creating a Campus Center that would draw people in and give them inviting spaces in which to work, play, and eat, but the final plan for renovations was a collaborative effort that included the College community.

The result? The central staircase is gone, opening up the lobby and creating a more dramatic space that can be used by diners or as a performance venue. McKinley’s itself has been enlarged, with a serving area designed to cut down on congestion at peak dining times. New booths boast Internet connections and represent prime real estate any time of day. A new fast-service bakery window accommodates students on the go – and if you want entertainment while you eat that late-night cheesecake, WARC has new quarters on the first floor with wide windows on the lobby that put deejays on display.

The warren of offices on the Campus Center’s second floor has been replaced with a broad walkway called Main Street, where the post office, the bookstore, a game room, and the student-run Grounds for Change coffeehouse are all just steps away. The bookstore has undergone perhaps the most dramatic transformation – released from its dark digs in the basement of Cochran Hall, it now is on two levels, with display windows for merchandise.

In the center of Main Street an atrium provides natural light and a sense of spaciousness, with a staircase leading to the third floor, where student organizations have their offices. Also on the third floor are the cultural center, the student activities and diversity affairs offices, and five attractive meeting rooms that can accommodate groups from ten to a hundred. Television monitors on each floor let people know where meetings are being held. 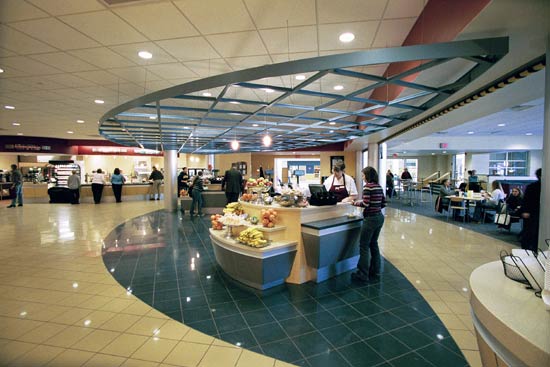 A Lesson in Continuity

Secretary of the College and former dean of students Dave McInally points out that remarkable as the renovations are, they were a long time in coming. Three comprehensive reviews of the Campus Center have been conducted since the facility was constructed in 1971 – and three sets of recommendations for renovations were made.

Allegheny’s trustees were so convinced of the need for expansion and renovation that they not only approved the most recent plan but they provided a good share of the $8.5 million in funding from their own pockets.

McInally credits two directors of student activities – one former, one current – for making the Campus Center a truly student-centered facility. “This kind of campus center was the dream and vision of Paula Coyle, who gave so much of herself to this project,” McInally says. “But Ellen Kauffmann picked up where Paula left off. The person changed, but the vision lived. There’s a lesson here about Allegheny community and continuity through the years.”

Kauffmann is quick to share the credit, saying that students played a large part in making the Campus Center what it is. “It’s a center for students, by students,” she says. “If we hadn’t consulted students, we would have created a building for trustees, or for Meadville, or for the architect. But it’s for students.” She and Dean of Students Joe DiChristina worked hard to make sure students had a voice in the process.

According to Andy DeVincentis ’04, president of Allegheny Student Government, student input was directly responsible for McKinley’s bakery window and convenience-store corner – and students were consulted on other aspects of the renovations as well. “The changes have been phenomenal,” he says, echoing the opinion of many students.

Kauffmann is especially excited by plans to incorporate what she calls “living history” into the Campus Center. Memorabilia from Allegheny’s past – sports gear, trophies, articles from the Campus, Greek paraphernalia, and other artifacts donated by alumni – will remind the College community of the generations of students who have made Allegheny what it is.

McInally describes the new Campus Center as “metaphorically and literally a crossroads, where students, faculty, and staff can talk outside formal meeting spaces.” Hopes are, he says, that students will experience something similar to what many alumni will remember as the gestalt of the old Grill: an environment that engenders what McInally describes as “interactions from the most playful to the most meaningful – interactions that can’t be scripted.”

Bill Brennan, of Celli-Flynn Brennan, compares the role a campus center plays in the life of a college to the role of a living room in a house – and he also notes that an attractive, highly functional campus center is something that colleges can ill afford to be without. “Colleges are competitive, ” he points out. “It’s important to have facilities that entice people to want to come. This building is fresh and new even though the structure is more than thirty years old.”

With the upcoming restoration of Cochran Hall, which will begin this summer, Larry Merriman says that alumni will add yet another dynamic to the mix of campus life in and near the Campus Center. “Alumni will enjoy coming to Cochran Hall – their alumni center – and feeling as though they’re in the midst of campus life,” he says. “Alumni love being able to connect with students.”

A dedication ceremony for the renovated Henderson Campus Center is being planned for later this spring. Merriman hopes to be there, just as he was present for the ceremony in fall 2002 that kicked off the project – and as he hopes to be present for the dedication ceremonies for the alumni center and the theatre and communication arts building. As he’s happy to remind the college community, “The best is yet to come.” 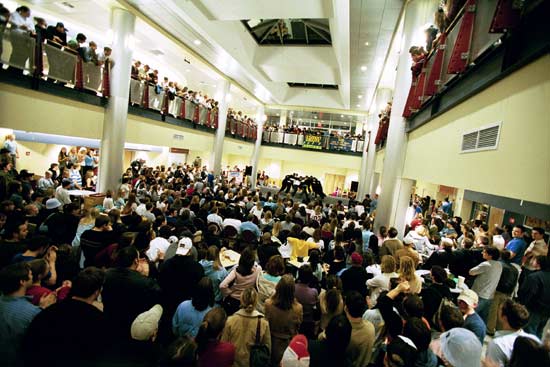 This article was featured in the Spring 2004 issue of Allegheny Magazine.