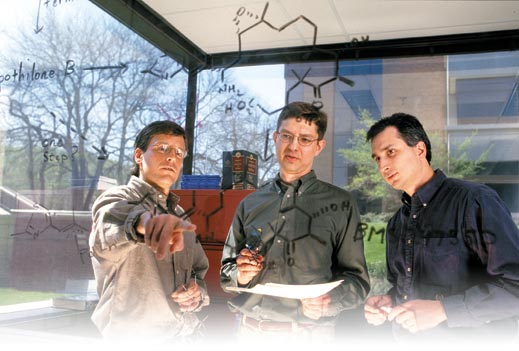 The effort to create new cancer treatments is a process that often ends in failure, despite years of work and hundreds of millions of dollars in research outlays. Only 8 percent of cancer drugs considered by the Food and Drug Administration win approval, and other promising prospects are derailed before they even get to the FDA because they don’t quite work. A notable exception is Ixempra, a newly approved drug used to treat advanced breast cancer patients after first-line treatments have stopped working.

The breakthrough came about in part because of the persistence and ingenuity of two Allegheny chemistry graduates, Greg Vite ’82 and Bob Borzilleri ’89, who work as scientists at the cancer research unit of Bristol-Myers Squibb. They were able to help turn a substance secreted by African riverbank bacteria into a potent new weapon against cancer. Scientists believe that the bacteria produce the substance, called epothilone, to attack its enemies in the soil.

When German scientists tested epothilone on cancer cells in a petri dish, it killed them. That discovery set off a race among cancer research centers to turn the substance into a commercial drug. The competitors included the famed memorial Sloan-Kettering Cancer Center, where another Allegheny chemistry grad, Aaron Balog ’91, was assigned to its epothilone research team. Bristol-Myers Squibb eventually won the race, but not before Balog made a breakthrough in epothilone research that may play a role in future cancer treatments.

The work of these three researchers illustrates not only the molecular sleight-of-hand that chemists routinely use to create new drugs but also the strength of Allegheny’s chemistry department, which teaches the kind of analytical thinking required to solve complex problems in drug discovery.

The story of Ixempra begins in South Africa along the banks of the Zambezi river, where a variety of epothilone compounds were discovered. It had once been thought that epothilone might prove useful as a plant fungicide, but that didn’t pan out. When epothilone was applied to fungus-infected plants, it killed them. 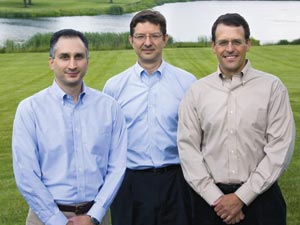 But the lure of a new cancer treatment drew the interest of other research labs, among them the cancer unit at Bristol-Myers Squibb, where Vite serves as director of oncology chemistry and Borzilleri worked as one of his researchers. Bristol-Myers Squibb already had a breast cancer treatment based on the substance taxol, which is derived from a type of yew tree found in the Pacific Northwest. But there was a problem: over time, breast cancer can become resistant to taxol-based treatments.

Company researchers found references in scientific studies to epothilones and their ability to work against cancer cells that had become resistant to taxol when the experiment was carried out in a petri dish. “You put the epothilones in the dish, and voila, the resistant tumor cells die,” Vite says.

That didn’t mean that epothilone would kill cancers in living organisms, however. When the company tested it on laboratory animals, it became unstable and failed to work. But Vite and his researchers concluded that it might work if they could change the structure of epothilone. At Sloan-Kettering, researchers had similar ideas.

The competing scientists took radically different paths toward that end. At Bristol-myers Squibb, they decided to try to tweak a naturally occurring molecule of epothilone. Vite’s team theorized that epothilone might remain stable in living organisms if they made a single alteration: exchanging an oxygen atom for a nitrogen atom.

Sloan-Kettering, by contrast, sought to create a series of synthetic versions of various epothilone molecules. “You can change every portion of the molecule if you’ve got a synthetic approach that uses simple building blocks,” says Balog. “If you start with the natural molecule, you’re somewhat limited in the changes you can make.” 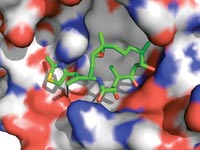 Sloan-Kettering eventually created synthetic versions of four different epothilone molecules, with Balog serving as the lead researcher on a team that created two of them. But before Sloan-Kettering’s breakthroughs could pay off, Bristol-Myers Squibb came through with a working drug. “This is where Bob Borzilleri came in,” Vite explains. “We had just hired him. It was his first job out of graduate school. As his first assignment, I asked him to make this new molecule.”

To do that, Borzilleri relied on the kind of analysis he had learned at Allegheny. “First you go to the scientific journals for ideas,” he says. “You might come up with two thousand things. Then you use intuition to try to figure out what will get you furthest. Here you use your liberal arts training. It teaches you how to think through problems.”

Borzilleri proposed an innovative, yet surprisingly simple approach–and it worked. “Bob found a way to open up the molecule and make the switch of oxygen for nitrogen,” Vite explains. “eventually, we found the entire process could be done in one vial. You could come in in the morning, take the epothilone off the shelf, and have a drug by the afternoon.”

“We had no idea whether it would work,” Borzilleri says. “This is a time-sensitive field. You have hundreds of ideas and you have to prioritize them. In this case, the time could have been spent on other things. But Greg was very supportive of the idea. He said we should try it.”

The FDA approved Bristol-Myers Squibb’s drug last October. Approval came after researchers at various centers had worked for roughly a decade to turn epothilone into a drug. But that doesn’t end research into epothilone. Bristol-Myers Squibb continues to do epothilone research, and it recently moved to supplement its own findings by acquiring the rights to research done at Sloan-Kettering. Among the Sloan-Kettering breakthroughs to be acquired were the synthetic epothilone molecules created by Aaron Balog, who has joined Vite’s research team. “Things have come full circle,” Vite notes.

In the meantime, the first patients have begun to benefit from Ixempra. “They had no option before this was approved,” says Vite. “Like most cancer treatments, it’s buying time. But from anecdotal evidence, it’s quality time. It’s time for patients to spend with their families. But it also buys time for new treatments to come along.”