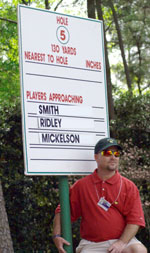 It sometimes seems that the flight path of a golf ball is determined not by the laws of physics but by Murphy’s law: what can go wrong will go wrong.

The best golfers, therefore, are those who minimize Murphy’s intrusion into their game. One of these is Nathan Smith ’01, a four-time All-American at Allegheny, where he led the Gators to four appearances in the Division III national championship.

More recently he won a spot in the Masters, the most prestigious tournament in professional golf, by winning the Mid-Amateur Championship for amateurs age 25 or older. He was paired for the Masters with Arnold Palmer, the 74-year-old legend who was making the last of his fifty consecutive appearances in the tournament he won four times.

Smith had played with Palmer once before at a competition between pros and amateurs at the course Palmer owns in his hometown of Latrobe, Pennsylvania. But this was not the same. The Masters is one of the biggest pressure cookers in all of sports, and this was Smith’s debut in major competition.

“He handled himself extremely well,” says Palmer. “I enjoyed being with him. I found him to be a very nice young man, and with some potential. He played some pretty good golf under the circumstances.”

“I was extremely nervous,” says Smith, a native of the small town of Brookville, Pennsylvania. “I’ve played in front of people before. But this was like playing in a football stadium.”

The nerves, however, are standard, even for pros who have been on the PGA circuit for decades. “I’m nervous every time I tee off,” says Palmer. “I always have been. If I ever stop being nervous, it’s time to quit.”

Like many of the competitors, Smith did not make the cut, which weeds out players after two rounds. He missed by two strokes. Palmer also missed the cut.

Smith first picked up a golf club when he was three or four years old. “My parents played golf, and I was kind of always around it,” he says. Though he also played baseball and basketball, he eventually settled on golf as his principal sport.

He picked Allegheny despite interest from Division I schools that would have offered an athletic scholarship. He says he was drawn to Allegheny for its scholastic reputation and its balanced approach to athletics. “The academic quality of Allegheny speaks for itself,” he says. And he wasn’t sure he wanted to play in Division I, where athletes are often treated as a commodity with little regard for their welfare.

At Allegheny, Smith was able to compete as a freshman and was allowed to develop at his own pace by then-coach Rick Creehan, now athletic director at Washington and Jefferson.

“It all kind of clicked at Allegheny,” Smith says. “They had a string of consecutive national championship appearances. They won the national championship in 1983. There was a lot of camaraderie between my teammates compared with going to a Division I school where you’re constantly competing with each other for a spot in the top five.”

Many amateurs who win a spot at the Masters never make it on the pro tour. But there are exceptions. Arnold Palmer, for instance, won a berth in the 1955 Masters by winning the U.S. Amateur Championship the year before. 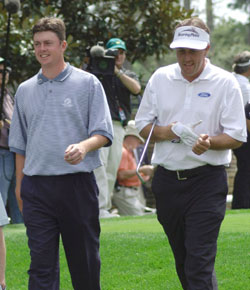 For those amateurs who do win a spot at the Masters, it’s an instant taste of the professional life. The perks, for example, are considerable. These include the sumptuous buffet at the regal Augusta National Golf Club in Atlanta, where the event is held.

But no amateur or professional goes for the food. The Masters, simply put, offers some of the best competition in the world. “You can’t buy that kind of experience,” says Smith. “I got to see those guys up close, and see what their games were like. I got to see how they hit it, how their short game is, how they work out, how they handle the pressure.”

Smith plays year round and hopes to win entry onto the Professional Golf Association circuit, where Tiger Woods and other stars compete. “I’ve worked extremely hard at my golf game,” he says. “I love it. I can’t get enough of it. I think I am good enough to play on the tour. I’m going to give it a shot.”

This article was featured in the Summer 2004 issue of Allegheny Magazine.