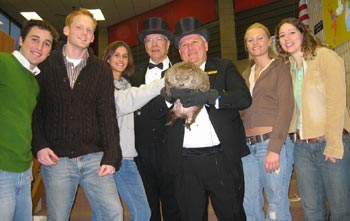 Along with papers, finals, and the comp, five Allegheny seniors can add a stint on reality television to their list of accomplishments for the year.

Sarah Grudevich, Janelle Hackman, Brian Lasser, Ryan O’Malley, and Rachel Schaffnit traveled to Punxsutawney this winter as guest hosts of Pennsylvania Public Television’s “Explore PA” series. The centerpiece of the episode? The annual Groundhog Day celebration, where the students were treated to a personal meet-and-greet with Punxsutawney Phil himself. “The people there went nuts!” says O’Malley. “They ate, slept, and breathed groundhog for the entire day.”

Adds Lasser: “I couldn’t believe how seriously everyone took the event. It’s something everybody should experience once.”

Groundhog Day was only one part of the Allegheny group’s itinerary. In three days of taping, the students also participated in several other activities, including carving an ice sculpture, joining in a lumberjack tournament, and visiting the Jimmy Stewart Museum.

“We put in really long days and a lot of the time we had to film outside. It was freezing,” says Grudevich, who was the first to suggest that the friends participate in the show. “But it was wonderful to share this experience with Rachel, Janelle, Brian, and Ryan. We bring out the best in each other, and we were delighted to represent Allegheny College on such a wide-reaching television show.”

The group agrees that the most surprising part of the experience was how unreal “reality television” is. “A lot of what we did was somewhat staged,” says Lasser. “If we said something that the producer liked, she would ask us to say it several times to get the best take.” The show aired this summer, and the students planned to watch it together to see how the finished product compared to their perspectives.

And, true to their Allegheny education, the students used the trip as an opportunity to learn. “Did you know that a groundhog is actually a woodchuck?” says Grudevich with a laugh. “I didn’t know that!”

This article was featured in the Spring/Summer issue of Allegheny Magazine.