Not Politics As Usual

Associate Professor of Political Science Daniel M. Shea knows that for many Americans, and especially for young people, politics is a dirty word. But for Shea it’s not just a disheartening fact of modern life it’s a challenge, one that the College’s new Center for Political Participation (CPP) is designed to meet head-on. The center, which Shea directs, opened in the fall term as part of the College’s New Initiative Program. “Our goal,” says Shea, “is to foster engagement in politics and to remind students, members of the community, and scholars of the importance of getting involved the significance for the citizen and the significance for the system.”

As it works toward that goal, the nonpartisan center will not only under-take an array of programs designed to draw citizens into the political process, but it will also involve Allegheny students in a number of ways, including the day-to-day workings of the center.

“Allegheny students are key players in the entire process,” Shea says. Student Fellows will conduct programs on campus and in the community, as well as develop a CPP Web site, newsletter, and other publications. Outreach internships will enable students to work closely with local political organizations and candidates. And a scholar/student collaborative program will provide opportunities for students to conduct research with faculty members.

In many ways, the CPP will build on the College’s involvement in Project Pericles, which was launched by the Eugene Lang Foundation to create national models for citizenship education. Allegheny was one of only ten colleges invited to be charter members of Project Pericles, which promotes the idea that the college experience should include education for citizenship in a participatory democracy.

The CPP also complements a number of other Allegheny initiatives, including the Values, Ethics and Social Action (VESA) minor, leadership and service learning programs, internships in Washington, D.C., and the Center for Economic and Environmental Development (CEED). Although the CPP originated in the political science department, Shea says he hopes to make the program as interdisciplinary as possible.

All politics is local, as Tip O’Neill liked to remind us, and the CPP will begin its own campaign to rejuvenate the democratic process at the grassroots level, among communities in the region. The center will offer summer programs, such as a governor’s school for high school students interested in political science, as well as in-service training sessions and an advanced placement certification program for high school teachers.

Angie Jack ’04, one of six initial Student Fellows, says that she finds the center’s outreach aspect especially appealing. “Not only am I excited about the chance to help others better appreciate the importance of politics,” she says, “but I’m psyched about immersing myself in real-world politics. It’s a wonderful opportunity to merge theory with practice.”

Allegheny students like Jack will take what they have learned in their coursework and collaborate with civics teachers in the region to prepare classroom presentations and on-campus programs. During presidential election years, for example, Shea plans to hold a mock nominating convention on campus. Other day-long workshops will bring high school students to campus to explore various avenues through which citizens can connect with government.

The CPP will also host political debates, forums, and civic events on campus in order to stimulate interest in politics and to give the public an opportunity to meet candidates and understand their positions on the issues.

“We’re quite ambitious about our educational outreach programs,” says CPP program coordinator Christine Norwood. “We’ve dubbed our plans Democracy in Action.’ The details and scope of our efforts will unfold in the months and years ahead, but we expect to make a real difference through our work with high school students and teachers.”

In addition, following each presidential election, the center will host a conference to discuss the issues that arose during the campaigns and to spur innovative research projects. “We are particularly interested in changing modes of participation, as well as increasing levels of involvement among subgroups in the population such as African Americans, Latinos, and younger voters,” says Shea. “We expect our research to confront a diversity of topics.”

The new center will enhance the visibility and scholarly reputation of Allegheny’s already strong political science department, notes department chair Robert Seddig. “For a relatively small liberal arts college, we have one of the most highly regarded and professionally active departments in the United States,” he says. “In the coming years, I look to the center to complement the research and intellectual vitality long associated with political science at Allegheny. Without question, Dan Shea can make this happen.”

Shea believes that engaging students in the political process isn’t a matter of overcoming apathy, but of convincing them that they can make a difference through politics in the same way that they already make a difference in other aspects of their communities. 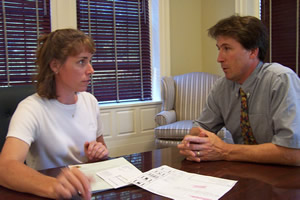 “Younger Americans no longer see politics as a viable outlet for their involvement, but as part of the problem,” says Shea. “Many people assume that younger Americans are apathetic and self-centered. It’s not true. They give their time, energy, and money to their schools, community, and nation. This is the activist generation. Somehow, however, their energy hasn’t extended to government and politics and that’s a problem.”

Nikki Morton ’03 became active with the CPP in fall 2002 as the center’s voter registration coordinator. She says that when young people decline to participate in the political process, they miss an opportunity to effect changes in policies and programs that affect their own lives. “Because most young adults my age are not voting,” she says, “our issues are not being heard.”

Shea says that the answer is to make politics personal again. “As the electoral system becomes more remote, more one-directional,” he says, “our affinity for ‘politics’ is shaken. Cynicism and distrust are rampant because government has become remote. Americans hate politics because they no longer do politics.”

Dan Shea, who likes to quote Thomas Dewey “The cure for the ailments of democracy is more democracy” believes it’s time for a change.

This article was featured in the Winter 2002 Issue of Allegheny College Magazine.