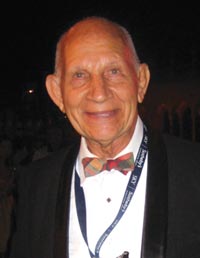 In the early 1980s Intorcio was shuttling food prepared in the kitchen at the Walter Salvo House, a retirement center in Northampton, Massachusetts. The kitchen’s manager, Bob Cilman, had formed a fledgling singing group of senior citizens and invited Intorcio to audition and, soon thereafter, to join.

That group, which became known as the Young@Heart Chorus, is featured in a documentary, Young@Heart, released recently in the U.S. by Fox Searchlight. The movie made a big splash at this year’s Sundance Film Festival and won the International Documentary Award at the los Angeles Film Festival.

Over the years Young@Heart’s repertoire has been anything but the expected. That’s perhaps evidenced best by Intorcio, who would don a dress and blond wig to perform as Channing, an impersonation started spontaneously during a show. As the audience applauded after a song, Cilman plunked a wig on Intorcio’s head and asked if he knew the words to Channing’s “Diamonds Are a Girl’s Best Friend.”

Young@Heart also provides its unique interpretation of songs by artists including the Rolling Stones, Sonic Youth, the Ramones, and Radiohead. Learning those more contemporary pieces was especially challenging, says Intorcio, since the group didn’t always like them at first. “Many of them were songs my son used to listen to that we could never appreciate,” he notes, “but the audience reaction was always so gratifying.”

Intorcio traveled to Europe thirteen times, as well as to Hawaii and Australia, to perform on the group’s “Road to Heaven” tour. “We only had about fifty in the audience the first night,” he recalls of the opening performance in the Netherlands, “but when our best singer did an encore in Dutch, we had them. The place filled up for the rest of the week.”

Intorcio, who toured with the Allegheny Singers as a student, doesn’t appear in the Young@Heart documentary; he left the group in 2003 when he moved to Florida. But, as a past member, he was invited to introduce the documentary at this year’s Sarasota Film Festival and answer questions afterwards. That was a fitting honor for Intorcio, who dedicates much of his time to helping his community. He serves as president of the Hearing Loss Association of Sarasota, advocating for captions on screens at area theaters and other businesses. Intorcio, who hears with the help of a cochlear implant and other assistive devices, also does readings to raise funds for a local performing arts theater.

Intorcio looks back fondly at the camaraderie and adventures he experienced with Young@Heart. “I feel like I’m right up on the stage with them,” he says of the documentary. “We never got paid but were wined and dined and saw the world.”