Actor, playwright, director, producer, and musician Corey Rieger has excelled on stage and off. No matter the role, he draws inspiration from a vital lesson learned from theatre classes at Allegheny: “First and foremost it’s about communicating with your audience,” he says.
In college, Rieger was al-ways performing, whether in Playshop Theatre productions or his own forms of theatre. Rieger’s comic roots began at Allegheny, where he and Nathan Hollabaugh ’00 started a sketch comedy group, Mr. Goodbird U.S.A., that later performed in Pittsburgh. In addition, Rieger and Sean Donaldson ’01 started White Meat, a two-man acoustic comedy band that went on to record two CDs.
Mr. Goodbird and White Meat “are a great example of the kind of ‘take-initiative’ mentality that Allegheny fosters,” says Rieger.
After graduation, Rieger worked primarily with the Pittsburgh Playwrights Company as an actor and director. He soon became a Pittsburgh playwright, too. The first of his plays, Stain, was praised by the Pittsburgh Post-Gazette, which noted that Rieger’s “dark comic instincts are intriguing.”
In 2004, Rieger moved to Chicago, where he performs in at least three shows a year, including Titus Andronicus and Oresteia at the Court Theatre. This June, he produced and performed the lead role in The Seagull at the Pittsburgh Playwrights Theater.
Although Rieger says his career is difficult at times, he’s not giving up. “I’m still entertaining the idea that this is what I want to do,” he explains. “I have had some great achievements that I’m really proud of.” 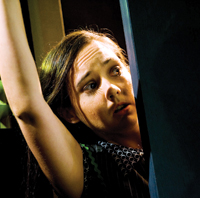 They say you can’t go home again, but for Jenny Crooks returning has proven to be a successful move. The writer, director, and actor grew up just outside Washington, D.C., and moved back there after graduating to pursue a career on stage.
Crooks worked as a house manager at Studio Theatre and took classes through its conservatory program. Since then, she’s found a home at several companies, including the Chesapeake Shakespeare Company. This June she performed as Viola in Twelfth Night and served as the show’s assistant director as well.
Her involvement in the D.C. theatre scene is no surprise given that Crooks performed in at least one production each semester at Allegheny. “My parents joke that they had driven to California and back because they came up and saw me in every dance or theatre show I was in,” she says.
Cross-departmental studies at Allegheny helped to shape Crooks’ success. “It’s funny that I ended up being more involved in theatre and the arts than my actual major of environmental studies, ” she says, “and the opportunity to be involved in the dance program with Jan Hyatt influenced where I am now because I take on more physical styles of theatre.”
Crooks also has tried her hand at directing, with two plays to her credit: Love and War: with the Bard’s Women in 2007 and Iconicity in 2008.
And she doesn’t have any plans to leave the area in which she has achieved so much. “There are a lot of opportunities here and a lot of great, small theatres in D.C.,” she says. 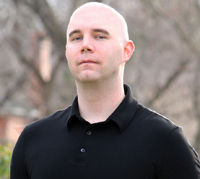 Filmmaker John Reilly is always thinking about the big picture but never forgets his roots and why he loves movies.
“I try to replicate the same kind of feelings that I had when I was younger,” Reilly says. “I’d be so pulled into it that I’d forget that I was watching a movie. I don’t think many other art forms replicate that.”
A communication arts major, Reilly wanted to pursue his dreams of creating films in New York City. Shortly after graduating, he became one of only thirty-six students (from 1,200 applicants) selected for the 2005 class at New York University’s Tisch School of the Arts.
When the Erie native returned home last May, he began brainstorming for his thesis and was inspired by a local TV star who directs and stars in his own fitness show on public access television. This film won’t be the first of Reilly’s works inspired by his hometown. Presque Isle, a silent film that he created in 2007, was featured in several national festivals.
But Reilly is most proud of the film that he made during his second year at NYU. Celeriac was a finalist in the Halloween Horror Nights Film Competition run by Universal Studios Hollywood.
“I don’t think I would’ve gotten to go to NYU if I hadn’t gone to Allegheny,” he says. “They look for someone with a voice, with a story. I think if I was from a bigger school I would have been a statistic instead of a voice.” 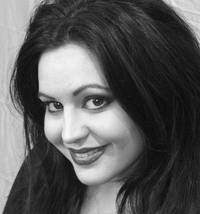 Molly Seremet ’04
Some people were born ready to survive in the big city. Though Molly Seremet came from a small Pennsylvania town, she’s adapting to New York City like it’s old hat.
After graduating, Seremet moved to Pittsburgh to pursue a career in acting. She worked on several productions, and an internship with the Pittsburgh Public Theatre in costuming gave her behind-the-scenes experience. “But that really wasn’t as satisfying for me as being on stage,” she says.
So Seremet decided in 2007 to move to New York City, where she studied with the Atlantic Theatre Company, an off-Broadway company founded by David Mamet and William H. Macy. Last year, she started her own company called Morse Code Theatre, producing and starring in My Name Is Rachel Corrie, which ran for several weeks in both Brooklyn and Manhattan.
“There are times when it’s overwhelming,” she says, “but putting together a show that says exactly what I want it to say–it was so worth it.”
In March, Seremet was in a production at the Broadway Comedy Club called Burlesque-o-rama. She also has a day job that allows her to act–performing children’s theatre at the Museum of Natural History.
The broad-based education that Seremet received at Allegheny has proven beneficial to her career. “I took back-stage and theatre and poli sci and English, and now I’m in a situation where I’m producing my own company and largely political theatre,” she explains. “I don’t think I’d be able to do what I do now without that background.” 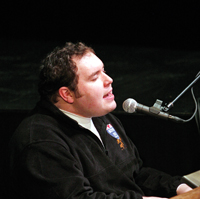 In college, Jon Abrams was known for his amazing piano playing and his love of Billy Joel. Three years after graduating, he has become the Piano Man himself, performing in the second national tour of Movin’ Out, a musical set to Billy Joel’s greatest hits.
“It’s a little unreal because I’ve been wanting to perform these songs for a lot of people for a long time and now I’m able to do it professionally,” Abrams says. “The band is tight, the dancers are amazing, and the show looks and sounds just like the original Broadway production.”
When Abrams graduated from Allegheny in 2006, he went directly into teaching music at elementary schools in Lowell and Lexington, Massachusetts. “I loved it and loved the kids,” he says.
But he still wanted to perform. So Abrams started the Strangers, a Billy Joel cover band, working with some of the original members of Billy Joel’s band. One of them was also performing in Movin’ Out and passed along Abrams’ name. He auditioned for Stewart Molina, a Tony Award-winning orchestrator.
Abrams says that Allegheny music professors Ward and Vicki Jamison helped pave the way for his success. “Ward instilled his sense of professionalism in me and demanded the best,” says Abrams. “Vicki taught me how to use my voice and be more comfortable.”
And Movin’ Out mirrors Abrams’ experience at Allegheny. “The liberal arts ties together music and theatre,” he notes. “Our show is such that everyone in it is doing something different.”