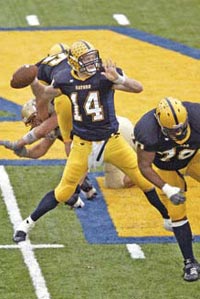 The football team improved greatly over its 3-7 record in 2005, finishing at 6-4 for the year. The squad used a balanced offense and an attacking defense to set the tone for a productive season.

The Gators began the year with a 35-10 victory over Westminster before falling to eventual NCAA Tournament qualifier Washington & Jefferson 22- 10. Allegheny then took advantage of its first game on the new Frank B. Fuhrer Field by demolishing Hiram College, scoring 35 second-quarter points in a 45-10 win. The Blue and Gold followed that victory with a 23-6 win over Denison on the road, improving to 3-1.

A trip to Indiana took Allegheny to Wabash College, where the Gators fell 41-27 despite a three-touchdown rally in the third quarter. Quarterback Jimmy Savage completed 38 of 58 passes for 400 yards—single-game school records in all three categories—while also throwing a careerhigh four touchdowns.

The Gators recovered a week later, picking up their fourth victory with a 49-38 shootout win over Kenyon College. Senior running back Mario Tarquinio rushed for 252 yards, just seven short of the single-game school record. The Gators next faced the College of Wooster Fighting Scots in a back-and-forth game. With four seconds remaining in the fourth quarter, the Scots completed a last-second Hail Mary pass for a touchdown to secure a 27-21 victory over the Gators.

A win in the wind and rain on Homecoming secured at least a .500 season for Allegheny, improving the team to 5-3 before a 39-21 road loss to eventual North Coast Athletic Conference champion Wittenberg University. The squad finished the season with a 35-14 victory over Oberlin College.

Leading the way for the Gators by way of post-season honors was kicker Josh Whiteside, who was named first-team All-Great Lakes Region by D3football.com. 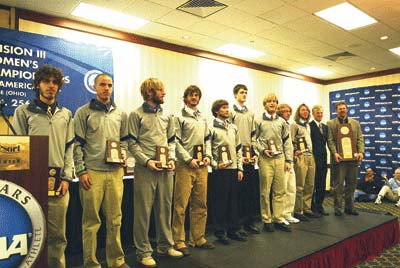 It’s difficult to improve on a tradition that includes more championships than any other school in the history of the North Coast Athletic Conference, but the Allegheny cross country teams did just that in 2006. The men reached nationals for the first time in school history, and the women continued their trend of national appearances.

The men’s squad easily claimed its sixth NCAC title by placing seven runners in the top 16, including conference runner of the year Marco Dozzi, who finished first overall, and runner-up Ryan Place. At the Mideast Regional Meet, five Gators grabbed all-region honors to secure a second-place finish and an automatic berth in the NCAA Division III Championships.

Allegheny closed the most successful season in team history by running its way to third place at the national meet, edging out Cortland State by one point. Both Place and Dozzi garnered All-America honors by finishing 6th and 23rd, respectively. They became the first duo in Allegheny cross country history to earn national honors in the same season. 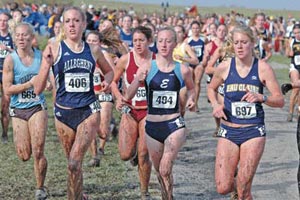 The Allegheny women were no less impressive in their 2006 season. The Gators finished in the top three at four races this fall, including second place at the NCAA Pre-Regional Meet at Waynesburg College and third place at the Mideast Regional. Allegheny narrowly missed its 11th NCAC title in women’s cross country, finishing just two points behind champion Oberlin. The Gator women closed the year with their 10th appearance at nationals, finishing tied for 25th.

Allegheny benefited from a blend of veteran leadership and young talent this season, including senior Scarlett Graham and first-year student Mia Symoniak. Graham was the team’s top finisher in six of eight races, finishing first at Rochester and earning all-league and all-region accolades with 2nd- and 19th-place showings, respectively. Symoniak was tabbed the NCAC Newcomer of the Year after crossing the line 6th overall before grabbing All-Mideast Region honors by coming in 27th.

Senior Michelle Corkum and junior Eva Weyers gave Allegheny four runners in the top 10 at the conference meet by finishing 8th and 10th, respectively, with Corkum also placing a teambest 110th at nationals and Weyers earning allregion with a 34th-place finish. Several Gators routinely competed for the fifth starting spot, with sophomore Carley Latus emerging as the most consistent. She finished 24th and 43rd at the conference and regional meets, respectively. 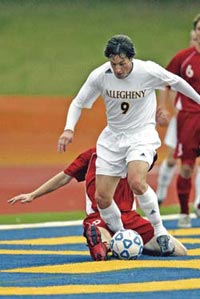 The men’s soccer team put together another successful season, reaching the NCAC Tournament finals for the third consecutive year. With an overall record of 11-5-3 and a 5-4-0 conference mark, the Gators finished with a No. 9 ranking in the Great Lakes Region.

Allegheny began the year by marching through its non-league slate with a 6-0-2 record and moving as high as No. 16 in the national rankings. The Gators suffered their first setback of the year to perennial national power Ohio Wesleyan in their conference opener, falling 2-1 despite out-shooting the hosts. Allegheny bounced back to win four of its next five NCAC contests, but the Blue and Gold put the season on the brink by losing a pair of league games to Denison and Hiram.

In the final regular season game, Allegheny and Wittenberg netted quick opening goals in the first four minutes then went scoreless for the next 100. Junior Eric Sloan sent the Tigers packing with a game-winning goal in the second overtime, securing the fourth and final NCAC playoff spot for Allegheny.

As the No. 4 seed, the Gators had the unenviable task of drawing top-seed and then-No. 4 Ohio Wesleyan. Reminiscent of its 2004 title run, Allegheny knocked off the Battling Bishops in penalty kicks to set up a finale with Denison. Despite erasing a 2-0 deficit and sending the contest to overtime, the Gators fell short in the bid for their second appearance in the NCAA Tournament, falling 3-2.

Allegheny was rewarded for its efforts by having five members voted to the All-NCAC team and two more landing all-region accolades. Leading the charge were senior Mark Dobish and Sloan, who each earned first-team all-league and thirdteam All-Great Lakes Region honors. Dobish was the offensive leader with 13 points on five goals and three assists, while Sloan chipped in with three goals and one assist while anchoring the defensive unit. Sophomore midfielder Nathaniel Yates earned second-team honors, while seniors Daniel Carik and Chris Fedele garnered honorable mention selections. 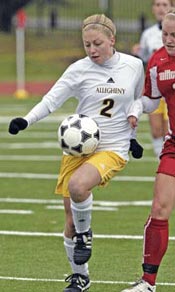 Denied a trip to the NCAC Tournament, the women’s soccer team made its presence felt in the race for the league championship by spoiling not just one team’s chances at the title but two in the final week of the regular season. The Gators posted their 11th consecutive winning season with an overall record of 10-7-1 this fall, including 3-4-1 in the NCAC.

After starting the season with back-to-back losses against steep competition at the Nazareth Tournament, Allegheny reeled off six consecutive wins against non-league competition. The streak came to an unfortunate end with losses in three of the next four contests, including a pair of one-goal losses in overtime to Carnegie Mellon and Kenyon. The Blue and Gold rebounded with dominating wins over Hiram and Earlham, but disappointing losses to Oberlin and Ohio Wesleyan eliminated the team from the postseason.

Despite missing the NCAC Tournament for the second straight year, Allegheny made an impact by keeping Wooster and Wittenberg from capturing the regular season title. The Gators easily disposed of the Fighting Scots on the road before denying the Tigers in their bid for the championship with a 0-0 tie.

All nine of Allegheny’s top scorers were underclassmen, including junior Ashley Hughes and sophomores Christy McShea and Katie Murphy. Both McShea and Murphy landed on the All-NCAC Second Team after finishing first and tied for second on the squad with 21 and 16 points, respectively. Hughes picked up honorable mention accolades with seven goals and two assists. The Gators were 9-0 when McShea scored a goal in 2006. 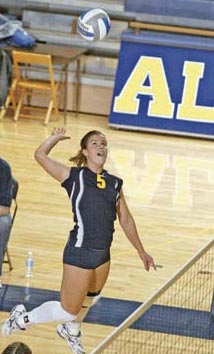 Wins may have been hard to come by in the 2006 season, but the volleyball team gained a wealth of experience going head to head against some of the best teams in the nation. The Gators finished out the year 11-20 overall and 6-10 in the North Coast Athletic Conference, placing sixth in the regular season standings.

The nine non-conference teams to which the Gators fell combined for a final record of 200-95. Out of Allegheny’s 14 non-league foes, eight posted 20 or more wins, including NCAA Division III Tournament participant Capital University (25-9).

Allegheny’s non-conference schedule was just preparation for another competitive season in the NCAC. After starting the season 3-7 in the league, the Gators split their remaining six games with 3-1 wins over Wooster, Ohio Wesleyan, and Earlham. Four of Allegheny’s 10 losses came at the hands of national semifinalist and NCAC regular-season champion Wittenberg and conference-tournament winner Hiram.

Head coach Bridget Sheehan (521-313) relied heavily on a trio of juniors in her 21st season at the helm, including all-league honorees Betsy LaPorte and Annie Schultheis as well as Jenna Hackett. These three led the way offensively, ranking first, second, and third in total kills and kills per game. Schultheis finished with a team-best 326 kills and ranked second on the squad with 344 digs en route to All-NCAC honorable mention accolades. LaPorte posted 267 kills and a teamhigh 137 blocks to notch second-team honors. Hackett tallied 221 kills and 66 total blocks, each third-best for the Gators.

This story was featured in the Winter/Spring 2007 issue of Allegheny Magazine.