by Professor of History Paula A. Treckel

Photos by Mike Carnahan of the Jeffersonian Democrat, Brookville, PA

If courage is indeed grace under pressure, then Nathan Smith ’01 is a courageous young man. Playing in his first Masters with golfing legend Arnold Palmer, he had not only to attend to his own game but pay deference to the man who had inspired generations of golfers.

The Embodiment of the Scholar-Athlete 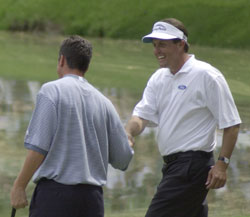 I first met Nathan in my American History survey course during the spring of his freshman year, and over the next few years he took a few more classes with me. I was pleased, but not surprised, when this well-mannered, polite, respectful young man—the embodiment of the scholar-athlete—became a four-time Division III Athletic All-American and, in his junior and senior years, an Academic All-American.

In 2002 Nathan won the Pennsylvania Amateur and was the runner-up at the North-South Amateur. He also tied for fourth at the Sunnehanna Amateur, fifth at the Monroe Invitational, and seventh at the Porter Cup. Nathan just missed reaching match play at the 2003 U.S. Amateur. But it was his victory at the U.S. Mid-Amateur Championship—he was the youngest winner in the tournament’s 23-year history—that brought him to Augusta.

What can I say about Augusta National? I had heard that it was one of the most beautiful courses in the world, that the greens were fast and tricky to read. Like millions of Americans I have watched the tournament for years on TV. But you really have to see this course to appreciate it. Television does not do its beauty, or its treachery, justice. I watched in awe and in horror as the best golfers in the world struggled with its slippery greens: I saw putts struck too hard roll off greens and into the water, while others, tapped too softly, rolled back to the golfer’s feet. This is the challenge of Augusta. And any man who wins here knows that he has truly earned his green jacket.

I was there in the remarkable position of watching not only Nathan but another young rookie golfer make his Masters debut.

Ben Curtis astounded the golfing world when he won the 2003 British Open Championship. Ranked 396th in the world as a professional, the PGA tour rookie earned the right to play at Royal St. George’s by virtue of a top finish at the Western Open Championship. Before turning professional, Ben played college golf for my husband, Herb Page, the coach at Kent State University. Along with the coveted Claret Jug and a check for $1.13 million, Ben received a five-year exemption to play in the Masters. 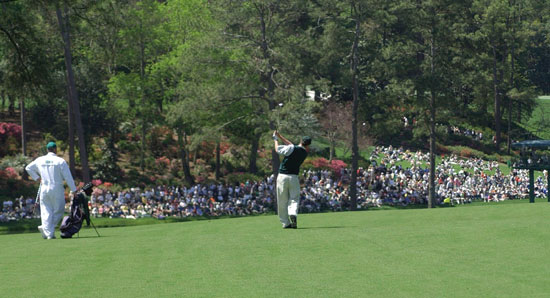 Monday morning, the first day of practice rounds at Augusta National, dawned crisp and clear. It was a special day for my husband. After twenty-five years of coaching at Kent State, he was about to experience the fulfillment of a dream. Herb made a deal with every player he coached: The first player to qualify for the Masters had to let him carry his bag. When Ben returned to Cleveland the day after winning the 2003 British Open, his first words to Herb were “Coach, you get to caddie at Augusta.”

When Ben drove Herb down Magnolia Lane to the clubhouse, a drive reserved for members and players only, I watched my husband’s dream unfold. Perhaps the highlight of the round was at “Amen Corner,” the heart of Augusta National, when Ben and Herb crossed the famous stone bridge that spans Rae’s Creek at the 12th hole. They both stopped and looked back, savoring the moment, gazing at the thousands of fans who stood watching among the pines.

That afternoon, as I watched Herb work with Ben on the putting green, Nathan appeared. After congratulating Ben on his win at Royal St. George, Nathan and his father, Will Smith, came over to greet me. Mr. Smith had signed on to serve as Nathan’s caddie for the entire tournament. It was a thrill of a lifetime, he said. As the Mid-Amateur Champion, Nathan told me, he got to stay in the famed Crow’s Nest in Butler Cabin on the clubhouse grounds. And, if that wasn’t special enough, he told me whom he was to play with for the first two rounds of the tournament: Arnold Palmer.

The 2004 Masters will go down in history as Arnold Palmer’s fiftieth consecutive, and final, Masters. The winner of four Masters’ green jackets, Palmer is one of the giants, if not the giant, of golf. It was he who made golf accessible to the public, who charmed the galleries with his smile and amazed them with his skill. But he had decided that this would be his last Masters. And it was with Arnold Palmer and tour-veteran Bob Estes that Nathan was to play the first two rounds of the Masters.

Many players rest on Wednesday, looking forward to the Par-Three contest that is held in the afternoon. Augusta National’s Par Three course is a little gem, a miniature version of the course upon which the Masters is played.

Some of the players have their wives or children caddie for them, and others choose children from the stands to help them sink their putts. Nathan chose his golf teacher and swing coach, Don “Sarge” Sergeant, to carry his bag. Nathan impressed the gallery with his first shot on #1, landing his tee ball only 22 inches from the hole. His reward for being closest to the pin was a crystal bowl, a nice little reminder of the afternoon’s competition.

That afternoon as I sat in the stands watching Ben and Nathan work on the practice range, I saw a remarkable scene unfold. Four elderly southern gentlemen wearing the distinctive green jackets that marked them as members of this most exclusive golf club were sitting on folding chairs inside the ropes where the players were hitting balls. They were joined by another member, garbed in the distinctive green jacket—an African American man, accompanied by his wife, sister, and young daughter, whom he introduced to the other men. Their response was to hug and kiss the women and the little girl. A man behind me said, “Now that is a sight you wouldn’t have seen at Augusta ten years ago.”

Change comes slowly to the South. The scene prompted me to think about the stand-off between Martha Burk and Hootie Johnson last year, and the controversy over the most revered golf tournament in America being held at a club that has no women members. Although no demonstration took place at the 2004 Masters—Ms. Burk decided to put economic pressure on corporations who support the tournament instead—knowledge of that controversy shadowed the Masters for me. 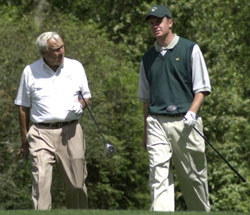 The patrons of Augusta have a special place in their hearts for Arnold Palmer, and they made their feelings known on Thursday, the opening day of play. The crowds surrounding the first tee and lining the fairway were enormous. “Arnie’s Army” awaited their commander. When Palmer stepped up to the first tee at 9:39 a.m., the crowd’s cheers rang out over the entire course. And that is what it was like the entire day. Each stroke of Palmer’s putter was met with applause, and every chip shot and every drive evoked emotion from the crowd. How difficult this must be for Nathan, I thought. How well would he play?

Nathan shot a six-over-par 78 in his first round at the Masters. He birdied the par-four seventh hole and had a four on the par-five 15th hole. He also had six bogeys and one double-bogey on the challenging course. Bob Estes finished with a four-over 76 for the round, while Arnold Palmer shot 84 (+12). Ben Curtis shot a one-over-par round of 73. For Nathan and for Ben, Friday’s round would be all-important.

There is a special tension in the air on Friday at a PGA golf tournament. It is cut day. The players know it and the fans know it, too. For an amateur like Nathan to make the cut and have the opportunity to play two more rounds in his first Masters would be an awesome achievement. He had a lot on the line.

Throughout the round, the cheers for Arnold Palmer could be heard in every corner of the course. So, too, could the groans as he hit into a bunker or missed a putt. Everyone on the course knew where Arnie was and hoped that he was playing well. Looking back across the fairway on #16, I caught a glimpse of this Masters legend walking along the ropes, talking to his fans, shaking their hands, and acknowledging their shouts of encouragement.

As the day went on, the crowds grew larger. The mass of people following the players throughout the day now had only one thought in mind: to be there on #18 when Arnold Palmer completed his last round at the Masters. It was impossible for us to get close enough to see Ben finish his round with a 77, +5 for the day and + 6 for the tournament. My husband and I found ourselves standing on our tiptoes in the back of the crowd as Palmer and his group approached the 18th green. I saw nothing but a glimpse of Arnie’s red shirt and the flash of his putter as he waved it over his head, saluting the crowds. Nathan approached the green-side bunker into which he had hit his second shot. He was +4, two under for the day—remarkable play in what could only be called challenging conditions. The projected cut for the tournament was 148, and he was right on the mark. He needed to par this last hole to make the cut in his first Masters. 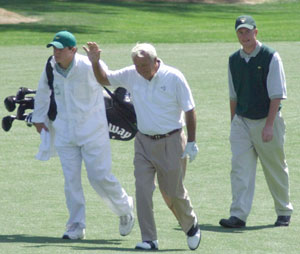 I saw the spray of sand in the air as Nathan blasted his ball out of the bunker and onto the green. The crowd’s reaction told me that he had left the ball 25 feet from the hole—a long putt for anyone to make, but with the weight of the cut riding on his shoulders and the pressure of playing with a golfing legend all day, the hole must have looked a mile away.

One will never know what might have happened had Nathan not putted out to allow Arnold Palmer to take center stage, to receive the accolades from his loyal fans when he sank his last putt at the Masters. What happened is that Nathan three-putted #18 and missed the cut by two shots.

The 2004 Masters Championship will be remembered as Arnold Palmer’s last Masters and as Phil Mickelson’s first major victory. But for me this Masters was the tale of two 26-year-old rookies named Nathan and Ben.

I hope that this was not Nathan’s last Masters. Unlike Ben, who also missed the cut, Nathan does not have a five-year exemption into the tournament. But somehow I think that Nathan will play at Augusta National again. And while he didn’t make the cut this time, no one can ever take away from him the special moments that he had at Augusta National: walking down its beautiful emerald green fairways with his father by his side—and into golfing history with a legend named Arnold Palmer.

This article was featured in the Summer 2004 issue of Allegheny Magazine.