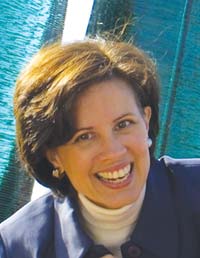 Richard Cook takes obvious glee in telling the story: During one of the periodic reviews that Allegheny presidents face, then chairman of the board of trustees John Wheeler ’61 finished by telling Dr. Cook, “Well, everyone likes you. But everyone loves Terry.”

She has been called the perfect partner for President Cook, and there’s no doubt that Terry Lahti has been an equally perfect partner for Allegheny College. Along with her husband, she has become Allegheny’s biggest booster—and her opinion carries considerable weight when she talks about Allegheny because Terry knows higher education from her own work in the field.

Having worked in admissions at Saint John’s University, the University of Miami, and Agnes Scott College, Terry became in 1991 what Gary Dorrien describes as “the whirlwind admissions director” at Kalamazoo College.

“She helped to lift Kalamazoo College to a stronger national standing and profile,” says former neighbor Dorrien, now professor of religion at Columbia University and the Reinhold Niebuhr Professor of Social Ethics at Union Theological Seminary. “Unfailingly friendly, as kind and loving-spirited as they come, and notorious for outworking everyone around her, she was a legend at Kalamazoo.”

Upon coming to Allegheny, Terry not only exceeded all the expectations for the president’s spouse—a demanding and challenging role in its own right—but she formed her own company, Lahti Search Consultants, which specializes in finding highly qualified professionals for enrollment-related positions at colleges and universities.

Terry has managed to balance both of those roles, each with its own complement of spinning plates, without missing a beat. 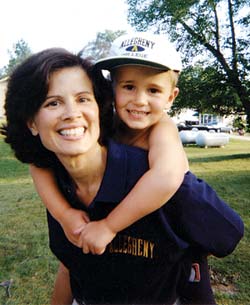 “I have never met anyone quite as genuinely gracious and considerate as Terry,” says Nancy Smith ’74, who teaches Spanish at Allegheny College and whose husband, Rob Smith ’73, is a trustee. “Everyone, to a person, that I have met who also knows Terry feels exactly the same way. Terry is such a humble person and she always finds something to admire in others. She asks those insightful questions about one’s life that a person may not have thought about before but Terry has been thoughtful enough to ask.”

Ellie Davies, whose family funded the Davies Community Service Leader Program at Allegheny College in memory of her late husband, Lew Davies ’40, is another local friend. “Terry has a unique way at a reception or gathering,” she says, “of simply walking up to someone, putting her hand on his or her arm, and saying something that suddenly makes that person feel like the most special person in the room.”

That gift for making others feel special, and for being intensely interested in other people, is as true and unerring whether she’s talking with trustees or students, clients or guests, adults or children. It’s also one of the reasons why the annual faculty and staff family picnic, with the emphasis on family, at the president’s house has become one of the not-to-be-missed events of the academic year.

The picnic—and the place Terry has earned at the heart of the College community—even became enshrined in song this year when the faculty rock band Credit/No Credit performed covers of rock classics at the annual Dean’s Dance in February.

The audience whooped and hollered as the band sang to President Cook a new chorus to The Temptations’ “Ain’t Too Proud to Beg”:

But the biggest applause of the evening came when they sang the next verse:

Well once every fall we all come to your place
For an evening of makin’ merry.
I guess we’ve found someone to take your place,
But if you gotta go, well at least leave Terry!

This article was featured in the Winter/Spring 2008 issue of Allegheny Magazine.