Twenty years ago, Dr. James Trippi ’75 volunteered to hand out coffee and doughnuts at an Indianapolis soup kitchen. When he got there, he immediately realized that the kitchen’s clientele needed his medical expertise far more than they needed doughnuts. 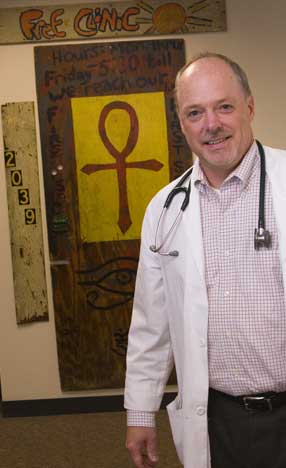 In many cases, Trippi saw untreated medical problems so advanced that he could make a diagnosis on the spot. “Rather than hand out doughnuts, we decided to offer them medical care and a homeless shelter,” he says. That was the beginning of Gennesaret Free Clinic, which now serves 12,000 uninsured patients a year.

Gennesaret is among a wave of free clinics that have emerged in big cities and small towns across America in the last four decades as the number of uninsured has grown to more than 45 million. The doctors who staff these clinics are often unpaid volunteers working part time. Others work full time at a fraction of what they would make in a private practice.

Their reward is a chance to practice high-quality medicine unencumbered by many of the problems that plague much of the U.S. health industry. “It’s why most of us went into health care–to make people feel better,” says Trippi, one of at least four Allegheny graduates involved with the free clinic movement. “At the free clinic, there’s not a lot of paperwork. There are no insurance companies to dicker with. And we haven’t gotten one malpractice suit in twenty years.” Free clinics operate on shoestring budgets within the mammoth U.S. health care system. Yet with scant resources they change the lives of patients whose conditions would otherwise go untreated. For instance, an early diagnosis of high blood pressure may prevent a stroke; an iron tablet may energize a listless patient weakened by anemia.

Sometimes, the problem is much tougher. “In the early days of HIV, when we didn’t have effective therapy, many of the people we saw here had been living on one of the coasts when they got sick and they came home to die,” says Dr. Pete Cubberley ’57, former medical director and current volunteer at the Free Clinic of Cleveland.

Today, HIV is a chronic disease treatable by medication, and the Cleveland Free Clinic’s HIV patients have become survivors. One has graduated from medical school. Another recovered to the point that he could move back to California. “I still get a Christmas card from him every year,” says Cubberley. Free clinics get the patients that mainstream medicine doesn’t want. The common denominator among them is that they are uninsured and don’t have the resources to write a check for their care. Mainstream hospitals are required by law to provide emergency care to the uninsured, but after doing so they may show patients the door.

It’s not unheard of for destitute patients to undergo major surgery at a hospital and then have to recuperate in a homeless shelter. In the worst case, hospitals may resort to “dumping,” a practice recently exposed in Los Angeles by the Los Angeles Times.

“They just want to get rid of the patient,” says Dr. Dennis Bleakley ’64, a staff doctor at the JWCH Institute Free Clinic in downtown Los Angeles. “They do it under cover of darkness, dropping the patient off from a hospital van, or by putting them in a cab and sending them off . There was one case where a patient who had undergone a colostomy was walking around L.A.’s Skid Row after being dumped. He was disoriented and still in his hospital gown.”

Bleakley first encountered the shortcomings of the health care system long before he became a doctor. “My grandmother broke her hip. She went to the hospital and while she was there she had a gall bladder attack. Then she had a heart attack and almost died. She didn’t have health insurance and the expense wiped out her life savings. At the time I said to myself, ‘There’s something wrong with that.'”

The modern free clinic movement dates back to the late 1960s, when a clinic was set up in San Francisco’s Haight- Ashbury district to help users of psychedelic drugs come down from bad trips. But as the years have passed, the mission of free clinics has changed often mirroring the country’s shifting health care needs.

“When this clinic first opened, the colleges didn’t do anything in terms of providing contraception,” says Cubberley. “We would have buses come up from Kent State University once a week with girls getting birth control pills. We also dealt with a fair amount of drug use. That’s changed greatly over the years. There’s still some drug use, but mostly not with middle class kids. Today, the clinic serves people who don’t have health insurance and can’t get it because they can’t pay for it.”

The Free Clinic of Cleveland is also treating increasing numbers of immigrants, both documented and undocumented, says Dr. Steve Weirich ’81, the clinic’s current medical director. “We’ve seen people from over one hundred countries,” says Weirich. “Our typical patient is a person who got divorced and lost insurance or who lost their job.

By the time they arrive at the clinic, some of these patients have been without medication for extended periods, in some cases for years and they have gotten progressively sicker, he says.

The uninsured have long been around, but in recent decades their growing numbers have begun to overwhelm the medical system. “We are running the risk that we may see the day when a majority of the population doesn’t have health insurance, if things continue the way they’ve been going,” says Weirich.

Calls are growing for national health insurance to fill the void, and some of the biggest supporters of universal government health care can be found at free clinics. “We in the free-clinic business have a not-so-secret agenda and that’s national health insurance,” says Weirich. “A lot of organizations want to self-perpetuate. Everybody who works here would like to be out of a job.”