Katy Proch is perhaps an extreme example of the kind of student Scott Friedhoff has in mind when he talks about “unusual combinations.” As vice president of enrollment, it’s Friedhoff’s job to spread the word about just what Allegheny has to offer students—not just any student, mind you, but students who have what Allegheny calls “unusual combinations of interests, skills, and talents.”

The College’s viewbook says it well: “At Allegheny College, when we talk about unusual combinations, we mean it as a tremendous compliment—a compliment that recognizes the complexity possible in each one of us. At Allegheny, we not only recognize human complexity, we model it, we embrace it.”

With this message to prospective students, Allegheny puts into words what alumni have known all along: Allegheny College is a place where students with unusual combinations of interests, skills and talents excel.

Katy Proch lives the concept. A neuroscience major and German minor who is studying in Cologne this fall, Proch has a demanding schedule of classes and a sharp focus on her pre-med studies, yet that doesn’t stop her from pursuing a variety of interests—and finding venues for a remarkable range of talents. 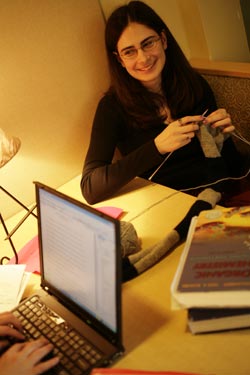 Proch, who is a junior this year, is a member of Allegheny’s equestrian team. A violinist for twelve years, she serves as associate concertmaster of the College’s Civic Symphony. She also belongs to the neuroscience club, which last year publicized Brain Awareness Week by handing out gummy brains in the Campus Center.

She’s participated in Make A Difference Day, Senior Citizen Recognition Day, an Emerging Leaders retreat, and the Collegiate Leadership Conference. She also serves as a writing consultant in the College’s Learning Commons and is a member of the Alpha Delta Pi sorority.

Unusual combinations—or just a highly motivated student who personifies what a liberal arts education is all about? Maybe both—but the combination becomes more unusual when you take into account that this neuroscience major also researches and sews her own Renaissance-era costumes, with the painstaking attention to detail that you would expect from a student who spends hours each week in Allegheny’s science labs.

For Christmas one year, Proch even sewed corsets as gifts for her College roommates. Even by Allegheny standards, Proch’s interests, skills, and talents are unusual.

“When I first got here, I was incredibly undecided about what my academic focus would be,” she says. “Instead of coming to Allegheny, I almost went to music school. I spent most of my freshman year here aghast at the number of choices I had. But then I spent my first summer here doing research and loved it.”

Although it’s not impossible for students at Allegheny to focus like a laser beam on preparation for a chosen career, Allegheny doesn’t make it easy. We’re one of the few liberal arts colleges in the country that ask students to choose a minor as well as a major—and that minor has to be outside the division of the major.

Although the laser-beam approach to preparing for a career has its advocates, the evidence is that a liberal arts education—and the unique extension of the liberal arts that Allegheny calls “unusual combinations”—is a more effective means of reaching career goals, especially in a world where jobs often evolve beyond our ability to predict what skills we’ll need to fill them. Diversity—of interests, skills, and talents—is the key.

“Labor trends point to the increasing importance of adaptability,” says a recent article in FastCompany magazine. “According to the Bureau of Labor Statistics, the average worker currently holds 10 different jobs before hitting age 40. Job tenures now hover around four years. Forrester Research’s Claire Schooley predicts these numbers will only get more extreme, anticipating that today’s youngest workers will hold 12 to 15 jobs in their lifetimes.”

Not only that, but with the fast pace of technology, the job you prepare for today may not even exist twenty years from now. On the flip side, jobs and new careers may open up for which you may not have overtly prepared but for which your liberal arts education and unusual combinations have formed a framework on which to build.

Jim Fitch, associate director of career services at Allegheny, has good news for students and alumni at liberal arts colleges. “A survey conducted by AT&T found that employees with a liberal arts education advance more quickly to middle and senior management positions than their colleagues who pursued other fields of study,” he says. What’s behind the trend? Fitch says that employers have come to realize that “students with a broad liberal arts background excel at problem solving, critical thinking, and learning to learn.”

The liberal arts are becoming even more relevant in the twenty-first century, says Roberts S. Jones in the Spring 2005 issue of Liberal Education. “Virtually all occupational endeavors require a working appreciation of the historical, cultural, ethical, and global environments that surround the application of skilled work,” he writes. “As knowledge, technology, and global impacts escalate at dizzying rates, so too will the value and significance of the liberal education increase.”

An Unusual Message Is Born

Back to Scott Friedhoff, who sees day in and day out how the “unusual combinations” message resonates with students who want college to broaden their interests, not narrow them.

“Our Unusual Combinations message makes it clear that Allegheny isn’t for everyone,” he says, “but it’s ideal for students who have a variety of interests and students who may want to discover or uncover new skills or interests they did not know they had. These are the kinds of students who should fit best at an Allegheny-type institution and who have traditionally looked at Allegheny. They are students who understand and value the traditional liberal arts experience.

“I think the real value of this fit recognition is best seen in our freshman-to-sophomore retention. While we are very proud of a fifty percent increase in applications in a three-year period, I think we should be most proud of our record retention rate. This is the best evidence of a message truly working. We are attracting students who want to be here and who work hard to stay here.”

Friedhoff, who has been with the College since 2002, remembers precisely when he first realized what it was that sets Allegheny apart from so many other liberal arts colleges with a rigorous curriculum and dedicated, caring faculty.

“After a number of months of meetings when I first came here,” he recalls, “I met a student in Schultz dining hall. The conversation started as many did: ‘What are you studying?’ The response: ‘Math…and English.’ I was stunned. In twenty-five years in the profession, I had never heard of that combination. My response to her was one of amazement: ‘Math and English? That’s wonderful! In 25 years of doing this business I’ve never heard of a student with that combination of majors—that’s…’

“And before I could get the word ‘unusual’ out, she interrupted me by saying, ‘That’s Allegheny.'”