Pioneer and Catalyst for Change 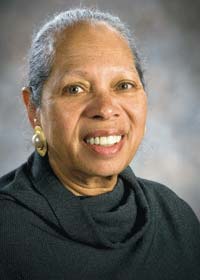 Yvonne Seon didn’t set out to blaze new trails—which makes her achievements all the more impressive.

“The legacy of racism in America is such that I was first at things that should have happened a long time before I did them,” says Seon, known as a pioneer in the academic field of black studies. “In many respects I have never felt that I was doing anything particularly unusual. I came along in the era of the winds of change when Africans and African Americans were each committed to the other’s struggle. Many understood that African Americans could not have full citizenship and rights in America until Africans had full citizenship and rights in Africa—and we functioned accordingly.”

Seon credits that atmosphere of collaboration with fueling her interest in studying languages—she’s fluent in French as well as Lingala, a Congo language—and leading her to travel to Africa in 1960. The first American to work for the government of the Democratic Republic of Congo, she soon advanced to the most prominent position available to a foreign citizen, managing a major dam construction project.

Energized by her two years in Africa, Seon returned to the United States and became the first black woman to serve as the chief administrative officer on a major U.S. delegation to a general assembly of the United Nations Educational, Scientific, and Cultural Organization. She then completed—while helping to design—one of the earliest black studies Ph.D. programs in the country.

Seon went on to develop a number of seminal courses in the discipline, including “The African-American Woman” at the University of Maryland and “Comparative Black Literature” at Howard University. A native of the D.C. area, Seon returned there for more than thirty years to work and to raise her three children—among them comedian Dave Chappelle. Seon seems unfazed by the national media attention that her son’s fame has brought, including an appearance she made with him on 60 Minutes II.

Before moving back to the nation’s capital, Seon worked with students at Wright State University in Ohio to found the Bolinga Black Cultural Resources Center, which evolved into a national model for other educational institutions. Just prior to the center’s 35th anniversary in January 2006, Seon returned to serve the institution, having been awarded the title of distinguished visiting director. A year later she became its permanent director, following her retirement as a professor at Prince George’s Community College in Maryland.

“It’s been interesting trying to understand the new context of the struggle for African-American identity,” says Seon. “It’s definitely not the same as it was thirty-five years ago.” She explains that, now, there’s generally not the same sense of urgency in understanding Africa that there was during the Black Power movement of the 1960s and 1970s. Seon is working to renew students’ interest in Africa as a point of ethnic origin and raise their awareness of the suffering caused by malaria, AIDS, and warfare on the continent.

“We are also beginning to understand more about the probable African origin of humankind and civilization, expanding our vision of who African people are,” she notes. “Part of our challenge is addressing African identity for everyone— being inclusive in programming and working to heal racial divisions in America—while still addressing the very real issue of African identity for black Americans.”

And Seon—the first African-American woman to join the Unitarian Universalist parish ministry, founding and leading a congregation in the 1990s—sees educating students as a different kind of ministry. Helping young people develop as independent and innovative thinkers ranks high among her ambitions. “We are in an era where conformity is expected and there’s a great deal of suspicion of those who don’t conform,” notes Seon, “yet it is the non-conformists among us who push us beyond mediocrity to greatness.”

This article was featued in the Winter/Spring 2007 issue of Allegheny Magazine.