For Kim Phan, success has always come early. A mere three months after celebrating her thirtieth birthday, Phan was named executive director of the prestigious International Law Institute (ILI) in Washington, D.C., where the average age of directors is well over sixty.

Phan majored in political science with a concentration in nuclear war under the direction of Associate Professor of Political Science Howard Tamashiro. “I owe fifty percent of my education to him,” Phan says. “He is so brilliant, modest, and devoted to making sure that his students developed a sophisticated thinking process beyond what they thought they were capable of.”

During the summer of 1996, encouraged by Tamashiro, Phan joined a research team in Vietnam through World Learning’s School for International Training. “I discovered that one out of five children died from waterborne diseases in Vietnam,” she says-an especially poignant statistic for Phan, who was born in Saigon four days after the city’s fall signaled the end of the Vietnam War in 1975. 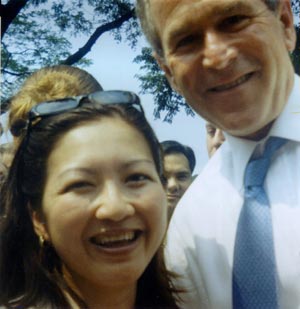 Before long, Phan says she realized that heightened government awareness and funding for wastewater treatment plants could potentially save the lives of 100 Vietnamese children per day. Returning to her homeland at such an impressionable age ignited Phan’s interest in environmental issues throughout Asia and foreshadowed a high-profile career advising governments of developing countries all over the world.

At age twenty-six, Phan secured her dream job as the United States-Asia Environment Partnership Liaison to the Asian Development Bank. Working at the U.S. Embassy in Manila, Philippines, Phan says she “found opportunities for U.S. companies and Asian countries to work together to clean up the environment in Asia.” Soon, Phan adds, she made another important discovery.

“I realized that just because a government has the money to build a water treatment facility doesn’t mean people will have access to clean water, or that the facility will be built well,” she says. “The problem was not a lack of money for projects, but a lack of knowledge on how to implement those projects. Ultimately, governments made bad decisions.”

All roads seemed to point Phan to the ILI, a private, not-for-profit organization established in 1955 whose mission is to “foster prosperity through the rule of law.” Phan joined the ILI as Director of Business Development in 2004, a role she still maintains in addition to her executive directorship.

Today, the Institute consists of three major components: education, advising, and publishing. Known primarily as a training institute, ILI has trained more than 14,000 government officials and practitioners from over 185 countries. The Institute also advises both the public and private sectors in the handling of negotiations, problems, and work with respective governments to draft various laws; and it has published books on law and legal systems, most notably the annual Digest of United States Practice in International Law for the Department of State.

“Sometimes corruption is so ingrained in a society that its citizens don’t even know that it’s bad,” Phan says. “That’s why we select government officials who are sincere about their country’s well-being, and we teach them the difference between good practices and bad practices.”

Phan’s business travels have included a trip to Honduras, a visit to Mauritius, and a stop in Uzbekistan. The Institute’s most concentrated efforts, Phan says, have been in China, where its staff trained nearly 300 judges in the Chinese National Justices College to make their rulings comply with the standards of the World Trade Organization. The ILI also implemented the China Banking Regulations Reform project to make the Chinese bank more conducive to business and the private sector.

“We empower government officials and practitioners by giving them knowledge and tools to do their job better,” Phan says, “and hope that the political will in their respective countries will allow them to better perform their jobs.”

While success may always come early for Phan, it never comes easy. “My work day is literally around the clock,” she admits. “Very often, I have to do conference calls at 2 a.m. because that is the hour of business for the Philippines and Uzbekistan.”

But Phan is showing no signs of slowing down. She even decided to forgo a honeymoon with husband Mattias Wiklund after their November wedding in order to attend the ILI’s 50th Anniversary Gala in Washington one week later, on November 17.

“It’s rewarding to know that what we do has a significant impact that trickles down,” Phan says of her work at the ILI, “to know that when you help governments make the right decisions, their countries and people will benefit.”