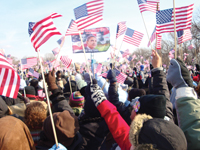 Let me start by saying this, that despite rumors flying around (thanks, Mom), I did not wear diapers for the Inauguration. Despite the fact that the Office of Diversity Affairs, which had organized and funded the trip, bought enough for everyone on the bus. I don’t think any of the students wore one. I can’t speak to the faculty and staff. Having cleared up that misconception let me proceed with my story.
The bus ride from Meadville lasted about seven hours, arriving in D.C. at 4 a.m. None of us had been drinking or eating that much—we knew the bathrooms were something to avoid. After we piled off the bus, group leaders handed us maps, money, metro cards, foot and hand warmers, and emergency contact information. I was wearing two pairs of pants, a shirt, two sweaters, my heavy winter jacket, and my purple vest—not to mention a scarf, gloves, wool socks, boots, and a hat. Under my vest, I carried my purse, with my camera, wallet, Skittles, and phone. 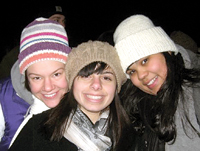 We broke down into groups of five to seven in order to be freer to move around. Our leader was George Byrnes, the husband of Dean of the College Linda DeMeritt. We love George, let me tell you. The man charged off as soon as we started following him and didn’t stand for anyone getting in his way. We called ourselves “Team George” and spent much of the time wandering through the crowds playing “Where’s George?” and then finding him three people ahead of us. We finally figured out the best way to get to a shuttle was to latch onto each other and be dragged along.
George learned our names quickly, identifying us by our hats. We reached our drop-off point and followed the crowds past other buses. At first, we thought these buses were lucky people who got to take their bus into D.C., but we soon realized they were full of D.C.’s finest. But they weren’t all from D.C. Throughout the day we saw police officers from Los Angeles, Massachusetts, Atlantic Beach, and countless volunteer fire departments from who-knows-where America. They leaned out their windows waving at us, and we waved back.
We walked a couple of blocks to the Mall, where we got our first glimpse of the Capitol itself. Everyone stopped as soon as they saw it and took a picture, so there was a huge cluster of people. We stopped, too, then followed George at full speed.
We passed people as much as we could until we reached as close to the front as possible: a little in front of the Air and Space Museum, just to the right of the first Jumbotron that people without tickets could see. We settled down for a long wait—it was still only 4:30 a.m. A couple of us tried sitting down, but there were so many people there wasn’t space to bend your legs.
There was an incredible sense of camaraderie in the people around us. We were all there for one purpose: to participate in one of the most important events in recent history. It was an incredible unifier for the crowd, and we kept each other awake and excited all morning, sporadically beginning songs that everyone joined in: “American Pie,” “Lean on Me,” “This Land Is Your Land,” and the National Anthem to name a few. There was also plenty of chanting, “Oh-bah-mah” being the favorite. “Bye-den!” and “First Lay-deez” came later in the day. Each chant was accompanied by American flags waving to stress each syllable. 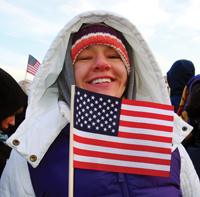 We waited. Stamped feet. Put warmers where we could—feet, hands, pockets, hats. Hoods were up, scarves across our faces like ninjas. We traded stories with those around us. We watched the sun rise over the Mall, a gorgeous sight. I wouldn’t want to see it again—it would mean being up way too early—but on this occasion, nothing was more appropriate.
At eight, the Jumbotrons began a re-broadcast of the concert at the Lincoln Memorial from the night before. It gave the crowd—by then restless and cranky—something to cheer for and instantly lifted the mood. We sang and danced and laughed our way through the music and speeches by various actors (my favorite was Jamie Foxx’s impression of Barack Obama).
At around nine, Amanda, Francheska, Kerry, and I went looking for one of the “warming stations” advertised on the Jumbotrons. Unfortunately, none was in our gated area, which we wouldn’t be allowed to return to if we left. So we hung around the fringes of the crowd for about an hour, glad to be free of the pressing bodies.
When we returned to our group, we found that the arrival of VIP guests had begun. We saw on the Jumbotron such cultural icons as Beyonce, Jay-Z, Dustin Hoffman, and John Cusack. They also showed the arrivals and motorcades of other important people, and each one would cause the Mall to erupt into cheers—endless, deafening, and thrilling.
Then the ceremony started. Aretha was so incredible I could hardly breathe. We all stood there, mouths open, agog to be seeing a living legend. When she was done, we screamed so loud and so long that I thought I didn’t know which I’d lose first: my voice or my ears. Turns out, it was my voice. When Yo Yo Ma and his crew played, the crowd went ballistic. I could not believe how lucky I was to be seeing these people perform.
I’m not sure if I can put into words what I felt when Biden and Obama took their oaths, but I’ll try: joy, elation, pride, relief, faith in America and change, love, the sense of being smaller than the world but knowing that you are important. And these only scratch the surface. I was screaming and crying, laughing and hugging, jumping and waving flags, and flashing my camera all at the same time.
There was so much energy and love in the group at that moment. I’ve never felt anything like it before and I doubt that I will feel anything like it for a long time to come. As for Obama’s speech, the man is an incredible public speaker. There’s a part of me in hindsight that realizes he’s still a politician and that he will make mistakes and fail on some promises, but in that moment we believed everything he said. He cast a spell of promise and hope.
I would do this again in a heartbeat, despite the amount of sleep I lost and the hundreds of pages of reading I had to do to make up for the thirty-six hours of school I missed. But I would not have changed a moment. I am so lucky that I got to go. I cannot believe I was there.