Steve Davies is an advocate for public spaces and placemaking.  Now principal of the Place Solutions Group, his work takes him around the world as a consultant, facilitator, educator, researcher, and speaker. 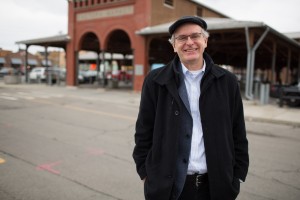 Steve is co-Founder of Project for Public Spaces (PPS) and guided the development of the organization for 40 years as a member of its senior leadership team.  It was in this capacity that he became one of the world’s experts on public spaces and their contribution to the revitalization of cities and communities.  Today, much of his work focuses on public markets, the role they can play in building community, and how placemaking supports local economies.

With over 500 major projects on his resume during his long tenure at PPS,  Steve has built a broad-based portfolio of transformative placemaking projects which have been catalysts for community revitalization in the U.S. and abroad. He is widely recognized for his extensive expertise in downtown urban design, transportation planning, small town revitalization, and the design of mixed-use development projects.

Steve was instrumental in creating and launching many key initiatives at PPS, including PPS’s programs in public markets and transportation; an initiative with Brookings Institution on innovation and placemaking; and expanding the global reach of placemaking. With support from the Rockefeller Brothers Fund, Steve’s seminal work in the Czech Republic and the Balkans after the fall of communism set the stage for the growth of placemaking as a global movement.

Since 2016, Steve has taught the Economics of Place as Assistant Visiting Professor at the Pratt Institute School of Architecture, Graduate Program on Placemaking and Urban Management.   He is also President of the Placemaking Fund, a non-profit established in 2018 to achieve large scale social and economic change through placemaking.

An accomplished cellist, he plays with and is board president of the Riverside Orchestra in New York City. Following his graduation from Meadville Area Senior High School, he went on to receive his BA in Art and Environmental Studies from Williams College and a Masters in Architecture from the University of California, Berkeley.